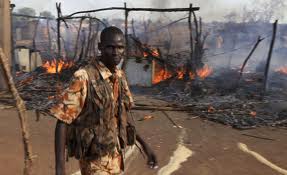 At the same time the UN announced it will deploy more forces to the region as clashes between ethnic groups continue, RT reported.

President Salva Kiir Mayardit, an ethnic Dinka, said that the recent violence was triggered by an attempted coup last Sunday, which was masterminded by former Sudanese vice-president Riek Machar, an ethnic Nuer.

Machar said on Sunday that the rebel forces in South Sudan are in control of much of the country following deadly fighting that has left more than 500 people dead.

Machar also confirmed that the forces fighting the government were under his command.

The country has been in turmoil since President Salva Kiir accused Machar a week ago of attempting a coup.

At least 500 people have been killed in what many now see as a civil war which began with the government struggling to keep control of the capital, Juba.

UN Secretary-General Ban Ki-moon called on both men to “find a political way out of this crisis”.

“I demand that all political, military and militia leaders stop hostilities and end the violence against the civilians,” he said.

“I call on them to do everything in their power to ensure that their followers hear their message loud and clear.”

South Sudan gained independence in July 2011 after its people overwhelmingly voted in a referendum for a split from the North.

The government in Juba is grappling with rampant corruption, unrest and conflict in the deeply impoverished but oil-rich nation, left devastated by decades of war.