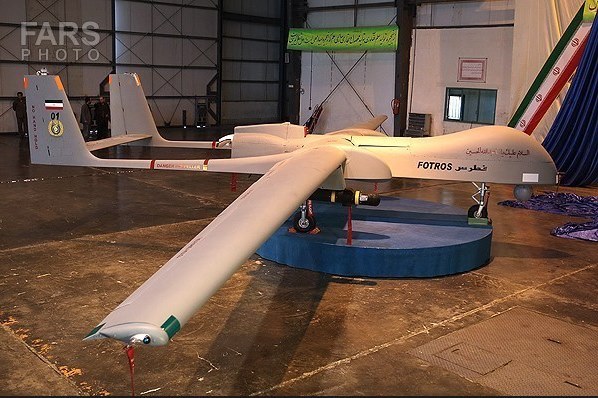 Mehr News reported that with the manufacture of the first Iranian drone in 1986, the rapid pace of the drone manufacturing industries had broken the US monopoly over drone manufacturing, and now after manufacturing attack drones, 5 models of the latest drones had been unveiled only in first 8 months of the current year (ending March 21 2014), while the heaviest sanctions had been mounted against the country’s economy.

Drones play a significant role in the hierarchy of the military power in different countries. These facilities have led to great achievements in military and political terms relying on its capabilities to operate day and night; near and far away land against mobile and fixed targets in all weather conditions through their capability to be distant-guided automatically.

Ababeel’s news design had been transferred to Iran’s Airplane Manufacturing Industries (HASA) after it passed the research phase in the Mechanics Industries of SASED in October 1986.

Metal model of Ababeel with significant changes to the initial model

Current models of Ababeel include Ababeel-B as airborne; long-range Ababeel-S, which is equipped with advanced navigation system, GPS, and autopilot system; and Ababeel-T which has been made of composites.

The general features of this drone are improved aerodynamic design, rapid overhaul, easy repair and operation, high flexibility and mobility, capability to operate in sea and land, recovery, and multiple uses, and justified end-user price.

The flier has been considered as the air target in simulation and training of different air defense systems, with short-, medium-, and long-range systems.

Ababeel-S; capable of sending pictures and flight up to 14000 feet altitude

This strand is equipped with System 123 (automatic stabilizer) and GPS. System 123, one of the modern engineering electroavionics of HASA, manufactured to deliver an easy flight experience and security to novice pilots in short- and long-range flights according to the Armed Forces requirements. Other features are imaging camera mounted and sending images; flight ceiling of 14000 feet (about 4200 m), operation of the flier in 32 separate stages, capability to launch from pneumatic launcher and rocket launcher.

The flier enjoys two vertical stabilizers whose performance has been demonstrated after successful performance tests during flight.

To train pilots, advanced un-manned planes are required in order for the pilots to work and exercise with. Talash UAV has been built having this in mind.

Hadaf-3000 (endeavor) is launched by JATO launcher with zero-length rail or pneumatic launcher. With the popularity of Talash-1 UAV, Qods Air Industries have manufactured Hadaf-3000 with higher maneuverability and speed than Talash, in industrial scale.

Mohajer-2 (migrant) capable of flight near US warship.

Design and manufacturing of Mohajer-2 has been intended to carry out surveillance and air control in inaccessible and far away regions.

Dorna had been in the agenda as the second generation of Mohajer-2 with the intention of improving range and flight endurance, and when revamped, the torso and wing major parts were in production line.

With advances in Qods Air Industries in design and improvement of the UAVs, and the good feedback about the previous models, Mohajer-4 was manufactured for air surveillance and target identification from 150Km distance.

Baaz UAV is a high maneuverable flier and is used to identify air targets and to train UAV navigation and guiding. This UAV moves in speed of 240Kmph and up to 10000 feet altitude.

Chabokpar (light wing) when landing and taking off the water

Chabokpar UAV is a product of HASA, used to training drone navigation, especially in Naval Forces.

Tizpar is a light and small model of UAV used in training of drone navigation and guiding.

Is one of Iran’s new drones developed for training purposes. Shaheen project drones display the clear advancement in design of this model of UAVs. Equipped with landing wheeled-cart has made it capable of use in training landing.

Developed as a bomber drone by the Army Air Force, the flounder drone has incorporated different design.

Karrar UAV developed and unveiled in summer of 2010, is the country’s first drone designed specifically for defensive purposes.

Karrar is a significant achievement for the country for improvement of the Armed forces performance, since it has opened new vistas in terms of both tactics and technology incorporated in the drone.

Saeqeh-1 is a delta-type UAV with medium-to-lower aspect ratio designed and manufactured in industrial scale by indigenous expert and technical labor for Armed Forces.

Toofan is an Iranian UAV which has been developed to find and destroy the enemies through optical explorer. In this type of mission, the UAV is designed for battle and with small dimensions, it could approach to the enemy without being detected and its high speed makes nay reaction extremely difficult.

Hamaseh UAV in the year of political epic

This UAV was unveiled during the closing ceremony of Sacred Defense martyrs festival. It is capable of carrying out simultaneously surveillance, attack, and control.

Commander of the Vali Asr (as) Drone Group of the NEZAJA responded to the question that whether the controlling package of the drone could be taken as a machine or it needed an enclosed space. “In general, UAVs have portable controls, moving on a tripod or as in an enclosed space.

The design and development of this UAV has been the monopoly of the US; however, Iranian experts in IRGC Air Force have recently obtained the technology needed to build the powerful Shahed-129 UAV.

Fotros has two distinct features compared to its previous models (most importantly Shahed-129). In addition of a range of 300Km, it enjoys a flight endurance of 30 hours, 6 hours more than that before.