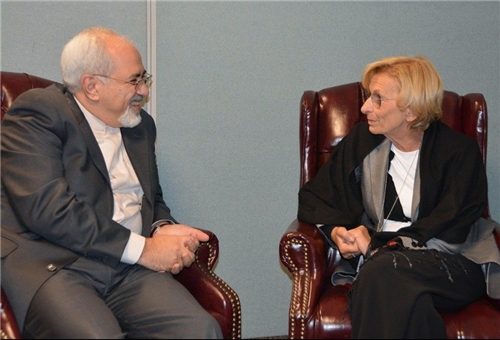 She came to Iran at the invitation of Iranian Foreign Minister Mohammad Javad Zarif.

During her two-day visit, the Italian official will meet with Zarif, President Hassan Rouhani, and Majlis Speaker Ali Larijani.

She held talks with the director of Iran’s Department of the Environment, Masoumeh Ebtekar, on Saturday.

After the meeting, Ebtekar told reporters that Iran and Italy plan to expand cooperation in the field of environmental protection.

An initial agreement has been reached about cooperation in the fields of energy and climate, she added.

“We can use Italy’s experience in the areas of green technology and promoting standards in scientific fields,” Ebtekar said.

Ebtekar said her meeting with the chief Italian diplomat can help improve “green” diplomatic relations between Tehran and Rome.

According to AFP, this is the first time in nearly 10 years that an Italian foreign minister has traveled to Iran and follows a trip by Italian Deputy Foreign Minister Lapo Pistelli in August, shortly after Rouhani’s inauguration.

The visit comes nearly a month after a landmark agreement between Iran and the 5+1 group (the five permanent members of the UN Security Council plus Germany) over Tehran’s nuclear program, according to which Iran agreed not to expand its nuclear program and to suspend its 20 percent uranium enrichment in return for a limited easing of the sanctions imposed on the country.

The agreement also stated that over the course of six months, Iran and the six countries of the 5+1 group will draw up a comprehensive nuclear deal which will lead to a lifting of the sanctions on Iran and Iran will provide the world verifiable guarantees that its nuclear program is solely for peaceful purposes.

Zanganeh and Scaroni discussed “potential new activities” in Iran subject to the lifting of sanctions — something that can only happen when the comprehensive nuclear deal is negotiated.