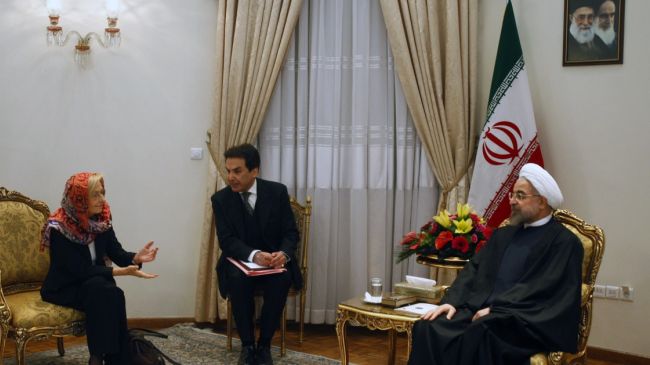 Iranian President Hassan Rouhani says the Islamic Republic’s ties with Italy, as an influential European country, can help to build trust with Europe.

“The current [level of] relations between Iran and Italy does not meet the expectations of both nations and the existing capacities of both countries must be used to expand ties,” the Iranian president stated.

He added that Italy has been an important partner for the Islamic Republic of Iran and has so far acted as the “gateway for Iran’s interaction with Europe.”

Iran is ready to boost bilateral cooperation with Italy in the fields of industry, energy, environment, and tourism as well as scientific and cultural exchanges, Rouhani said.

The Italian foreign minister, for her part, expressed her country’s readiness to bolster cooperation with Iran in economic, industrial, energy, tourism and scientific arenas.

Bonino added that Rome is keen to improve its ties with Tehran to serve its interests.

She expressed hope that Italy would help improve interaction between Iran and Europe and boost cooperation with the Islamic Republic on regional issues.

Heading a high-ranking political delegation, the Italian foreign minister arrived in Tehran on an official two-day visit on Saturday to hold talks with senior Iranian authorities.

Bonino is the first Italian foreign minister to visit Iran in nearly a decade.