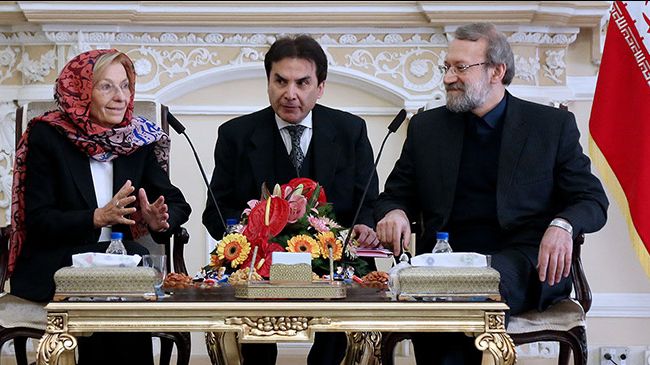 Iran, Italy must expand relations in all fields: Majlis speaker

Iranian Majlis Speaker Ali Larijani has called on Iran and Italy to make use of their great capacities to strengthen bilateral cooperation in all fields.

“Iran and Italy have many opportunities to expand close cooperation within the framework of common interests, particularly in the field of regional cooperation, which should be utilized,” Larijani said in a meeting with the visiting Italian Foreign Minister Emma Bonino in Tehran on Sunday.

He added that enhanced mutual relations would serve the interests of the Iranian and Italian people and expressed hope that Tehran and Rome would further bolster their amicable ties through joint efforts.

Larijani also stressed the importance of finding a political solution to the ongoing crisis in Syria.

“From the beginning [of the crisis in Syria], the Islamic Republic of Iran believed in a political solution to Syria crisis through Syrian-Syrian talks,” the Majlis speaker stated.

Syria has been gripped by a deadly crisis since 2011. Reports indicate that the Western powers and their regional allies, especially Qatar, Saudi Arabia, and Turkey, are supporting the militants operating inside the country.

The Italian foreign minister, for her part, said Rome attaches great significance to bolstering cooperation with Tehran in all sectors.

Bonino also emphasized that the Syrian crisis should be resolved through political approaches and expressed optimism that the upcoming international peace talks on Syria, scheduled for January 22 in the Swiss city of Montreux, would be successful.

Heading a high-ranking political delegation, the Italian foreign minister arrived in Tehran on an official two-day visit on Saturday to hold talks with senior Iranian authorities.

Bonino is the first Italian foreign minister to visit Iran in nearly a decade.