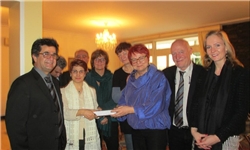 European Union parliamentary delegation who visited Tehran recently, in a non-diplomatic move, secretly met with two Iranian dissidents who had been convicted to terms of prison because of involvement in anti-government riots in Teharn following 2009 presidential elecetions.

The meeting was held in the Greek Embassy in Tehran.

According to Foreign ministry Website, the Greek charge dˈ affaires was summoned and was told that Iran is dissatified with the EU parliamentary delegation move.

The charge dˈ affaires was also told that Tehran sees the act as ˈcontrary to goodwillˈ and that Iranian Embassy in Brusseles had warned the European delegation about such a meeting prior to their visit to Tehran.