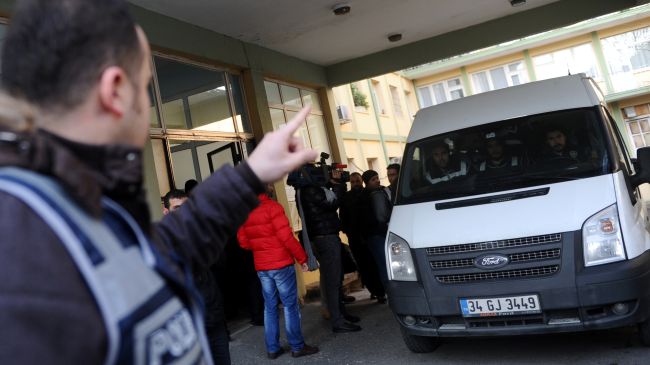 People arrested as part of a probe into alleged corruption arrive at the hospital for a medical check-up at the start of their custody in Istanbul on December 18 ,2013.

The sons of two Turkish ministers have been charged in connection with a graft scandal that hit the government officials close to Prime Minister Recep Tayyip Erdogan, media say.

Channels NTV and CNN-Turk reported the sons of Interior Minister Muammer Guler and Economy Minister Yafer Caglayan were charged and placed in custody early Saturday as part of the corruption probe.

The media added that the managing director of state-owned Halkbank was also charged with “corruption, fraud, trafficking in gold and embezzlement.”

Media reports said prosecutors had begun handing out corruption indictments to some of the 89 suspects arrested three days earlier, with the first eight formally arrested and placed in pre-trial detention on Friday. The arrested suspects may face possible bribery charges.

On Thursday, Istanbul’s police chief, Huseyin Capkin, was sacked after dozens of people including the sons of Turkish cabinet ministers and prominent businessmen, who are Erdogan’s allies, were arrested for inquiry over the alleged corruption.

The son of Environment Minister Erdogan Bayraktar was among those detained by the police. The suspects also include well-known businessmen and bureaucrats.

The Turkish premier has dubbed the inquiry a “dirty operation,” saying those behind the probe were seeking to form a “state within a state.”

The operation is being widely interpreted as a challenge to the authority of Erdogan, who boasts of being pro-business and has pledged to root out corruption.

Turkish political observers also speculate that the police raids could have been driven by simmering tensions between the Erdogan government and influential US-based Muslim cleric Fethullah Gulen ahead of elections next year.