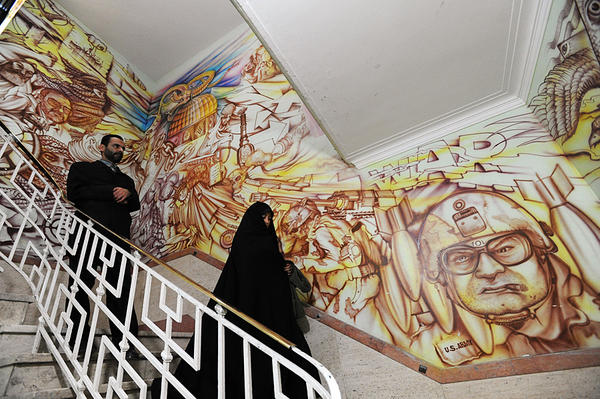 How far can any US-Iran rapprochement go?

The mutual obsession between Iran and the United States could not be more obvious at the former US Embassy in Tehran, where the tour guide – the “official narrator of the Den of Spies” – greets an American visitor.

“It’s your home, you can come anytime,” says Mohammad Reza Shoghi, tongue-in-cheek, as we step inside to view the array of Spy vs. Spy surveillance equipment and aged shredding machines, and to hear the anti-US narratives that have accumulated in Iran since 52 US diplomats were taken hostage in 1979 and held for 444 days.

But this museum, with its message of perpetual conflict with an enemy of unmitigated evil, contradicts the other story line unfolding as Iran’s Islamic revolution matures: a tentative easing of that perpetual US-Iran conflict. The past few months have seen unprecedented face-to-face dialogue over Iran’s nuclear program and a promise by centrist President Hassan Rouhani to seek “constructive reengagement” with the West.

But previous overtures always suffered from insurmountable setbacks. This is why the US and Iran are now limiting talks to the nuclear file, and moving carefully.

For many, the recent outreach – including a historic phone call between the US and Iranian presidents in September – already amounts to a thaw. How much further can any US-Iran rapprochement go, given a generation of mutual hostility, and the Iranian regime’s long-encouraged entrenchment of anti-Americanism?

Analysts say any broader US-Iran understanding will depend on progress in nuclear talks with world powers to prevent Iran from ever being able to produce a bomb.

A six-month interim agreement signed in Geneva in November freezes Iran’s program in exchange for a modest easing of sanctions, in a first step toward a comprehensive final deal. Reaching a final accord would help ease chronic mistrust, and could lead to a new US-Iran accommodation – a cold peace, of sorts.

“It’s an opportunity for both for both Obama and Rouhani, and it may be the last,” says Amir Mohebian, a well-connected conservative analyst and editor in Tehran. Integrating Iran, he says, can help “solve very important strategic problems in the world.”

Yet many hurdles remain, including US Senate legislation introduced Thursday that would violate the Geneva agreement by imposing more sanctions on Iran. A Dec. 10 US intelligence community assessment concluded that more sanctions now would “undermine the prospects” for a final deal, and Iran has stated that any new sanctions will kill the accord. The White House says it will veto such a bill.

“This is the last opportunity of shifting from the first generation to the second generation of leaders  … and the Leader wants to solve the issue of the US under his leadership,” says Mohebian. He adds that Mr. Khamenei, who is in his mid-70s, sees Iran as negotiating from “peak” strength because of the nuclear advances it has made despite sanctions, as well a belief in the growing appeal of Iran’s revolutionary message.

“The goals of [Iran’s Islamic] system have changed. Being strong is not just about military strength…. We know that [having] power makes goals changeable,” says Mohebian. “Why were we against the US? Because of its behavior. But if that behavior changes, then why [still oppose the US]? We are against our enemies. But if you are not our enemy, then why?”

Khamenei’s readiness to “solve this issue” does not likely mean a sudden alliance or friendship – at least under his watch – but instead finding a mutually agreed level of accommodation. Khamenei often speaks of Iran’s deep mistrust of the US government, listing past grievances that indicate to him that “not one day” has passed since Iran’s 1979 Islamic revolution without American attempts to undermine it.

Iran’s US-educated Foreign Minister Mohammad Javad Zarif, in his writings, says US-Iran ties are important, but that they also can be “never friendly.”

After the interim Geneva deal was signed, both US Secretary of State John Kerry and Mr. Zarif played down the prospect that the accord – and their own unprecedented direct contact – could be the first step toward improved ties. Yet hardliners on both sides have already attacked the deal as a compromise with the enemy.

“Certain people feel that we have to be more cautious when we are dealing with the West in general, and the United States in particular,” says a senior Iranian official who spoke on the condition of anonymity.

“They are very much skeptical of the way America has handled this case and will handle it in the future,” says the Iranian official. Smooth implementation of the Geneva deal – which is a “big ‘if,’” he adds – could “create an atmosphere of trust that you can build on.”

For the Iranians, that means focusing for now on a nuclear deal that sticks.

“The No. 1 priority for Iran is to contain the US threat, to lower tension and build up sufficient deterrence to prevent a US attack,” says an Iranian journalist who asked not to be named, explaining Iran’s contradictory policies of still accusing the US, while also seeking a thaw.

Hard-line critics of the deal have been fierce in Iran, despite Khamenei’s support for his nuclear team.

“When will [the Americans] agree?” asks Hossein Shariatmadari, editor of the hard-line Kayhan newspaper, who is an official representative of Khamenei. “They have seen everything [nuclear] of ours in the last 10 years and not been satisfied. So it is clear that they will never be satisfied.”

Though Khamenei has praised Iran’s negotiating team as “sons of the revolution,” Mr. Shariatmadari says, “good children of a family can make mistakes, too. We should point out their mistakes … hey got ripped off.”

Such an assessment fits the narrative of perpetual US perfidy at the former American embassy, where Mr. Shoghi, the guide, asserts numerous conspiracy theories, from US agents destroying the twin towers to create a “pretext” to invade Afghanistan and Iraq and “torture” their people, to a supposed Pentagon strategy of globally spreading poisonous pornography.

Upstairs, in a hall behind a heavy vault door with a combination lock, is a room-size box with two layers of plexiglass walls “for top secret negotiations,” the sign says, to prevent any eavesdropping. Three mannequins dressed in suits sit at a table inside with a 1970s-style phone.

Stepping out of a different secure communication room with a bank of telex machines, Shoghi curses under his breath, in Persian: “Great Satan!”

Though such views are the official line, in a country where “Death to America!” is still chanted weekly at Friday prayers, it is shared by only a fraction of Iranians, who paradoxically constitute one of the most pro-American populations in the Middle East.

The outside wall of the US Embassy wall is repainted from time to time, for example. Yet the recent retouch of one of the most striking images – a Statue of Liberty with a skull face – was inexpertly done, and looks less fierce than before.

Pedestrians pass the iconic images without batting an eye. The US Embassy in Tehran long ago settled into Iran’s revolutionary landscape.

“When I compare my classes to a couple of years ago, I see how the students are enthusiastic for dialogue with the US” because Iranian society “is more independent, more self-confident, and they think now is the time they can talk with the US [on] equal terms,” says Kayhan Barzegar, director of the Institute for Middle East Strategic Studies in Tehran.

“I think society is prepared to accept such a deal, but of course there is this classic perspective that mistrusts America,” says Mr. Barzegar. “It is there, and … the conservative part of Iran’s politics is very powerful when it comes to the US.”

That means nuclear negotiators and their political leaders must move carefully if the process is to yield a real, long-awaited US-Iran thaw.

Iran’s neighbors and hardliners on both sides should “get used to it,” says Barzegar: “Iran and the US cannot stay in conflict endlessly.”