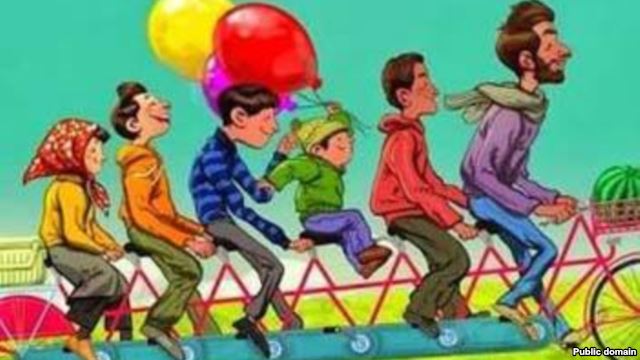 “One flower does not make Spring. More children, a happier life.”

That’s the message being sent to Iranians in an effort to encourage them to produce more offspring.

Colorful billboards bearing the slogan and depicting a happy-looking family have cropped up along major highways in Tehran. The idyllic family of six is shownpedaling together on a tandem bicycle under a blue sky, leaving a family of two far behind. But a key component to any family is noticeably missing — mothers.

Critics say the message and imagery are irresponsible, sexist, and far from the grim realities of daily life in the Islamic republic.

The billboards appear after Supreme Leader Ayatollah Ali Khamenei said in a speech last year that Iran should double its population to 150 million, or even more. Khamenei argued that a baby boom was needed to boost an aging population and to sustain development.

After the supreme leader’s comments, and late in former President Mahmud Ahmadinejad’s final term, Iran launched a campaign to encourage Iranians to have more babies by offering financial  incentives. The campaign reflected a shift in family planning policies established  in the 1990s that included birth-control methods, education, and the promotion of small families.

The billboards were created by the House of the Designers of the Islamic Revolution, which also produced a series of controversial anti-U.S. billboards that were installed in Tehran in October.

Abbas Sanei, the director of the Designers of the Islamic Revolution, told the semi-official Mehr news agency that his group came up with the idea for the billboards after Khamenei expressed concern about one-child families and an aging population.

The billboard of the bicycling family shows a father and his five children — four boys and one girl — but leaves the fate of the mother a mystery.

Perhaps she was left out because of Iran’s ban on women cycling, but her absence did not escape users of social media.

One Facebook user suggests the mother “is either giving birth or has died as the result of her multiple childbirth experiences.”

Women’s rights activist and poet Sena Naseri noted in a piece published on “The Feminist School,” a Persian-language website dedicated to women’s issues, that women are seen as tool for society to achieve happiness, even as they are personally deprived of it.

“‘The mother’ has not been only eliminated from this picture, she’s been denied the joys of life, from going on a picnic with her husband and children … because she is busy ‘making’ babies,” wrote Naseri. “She is a baby-making machine.”

A second drawing that is part of the billboard campaign does include a mother, seen rowing a boat along with her husband, three sons, and one daughter. They’re followed by another boat, in which a miserable looking father and son are struggling to keep pace.

But the mere idea that having more children was a good idea, considering the economic suffering in Iran, rubs many the wrong way.

In response to an Iranian news site’s article about the billboard campaign, one commenter asks: “Do the gentlemen who designed these billboards have any idea about living costs, the rate of inflation, poverty levels, and unemployment in our country ? Do they know how much a package of diapers costs?”

Another asks: “What have [authorities] done for the current population that now they’re now telling us to have more babies?”

A post on a popular Facebook page went so far as to say that having babies in Iran — where, he said, baby food is difficult to find — is “the biggest crime”.

Others had similar comments reflecting the tough economic conditions many face in Iran.

“Having children in this country is a clear example of child abuse,” wrote one user. “We don’t live, we just breath. We can’t afford to live. Now they ask us to bring more children into this miserable life.”

Well-known poet Soheil Mahmoudi wrote on his Facebook page that the campaign made him cry, and noted the obvious signs of poverty he witnessed on the streets of Tehran.

“Without any exception, at any red light, I saw a number of men, women and young girls selling Hafez fortunes …  or  begging,” he wrote.

Mahmoudi said the authorities should get rid of the billboards.

Some of the online criticism was also directed at the blue sky in the billboards, which Tehran citizens wrote they rarely see because of the heavy pollution in the city.

“Where is this blue sky?” asks one young man, adding that definitely isn’t in his city.

A Facebook page dedicated to environmental issues posted a picture of the boating family billboard next to photos of some of Iran’s dying lakes and rivers, asking whether a country that is facing water shortages can handle a larger population.