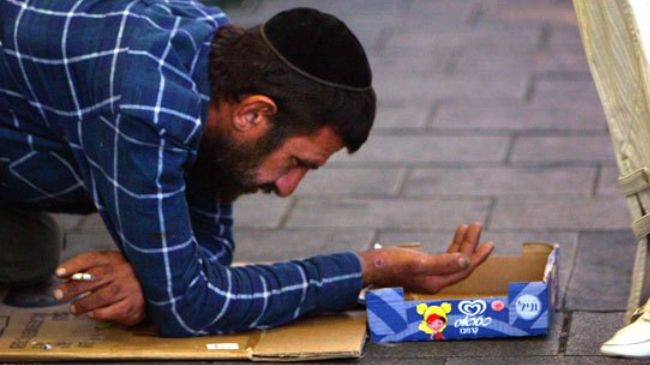 A new report shows that more than 1,700,000 Israelis, including one-third of Israeli children, are living below the poverty line.

According to the official data of Israel’s annual poverty report, published by the National Insurance Institute (NII) and the Central Bureau of Statistics (CBS) on Tuesday, 439,500 families and 817,200 children, or 33 percent of minors in the country, lived below the poverty line in 2012.

The data show that the poverty rate among the elderly has risen more than three percent to almost 23 percent. The cost of living and changes in pensions have been cited as the reasons for the increase.

Based on the report, 13.7 percent of working families lived below the poverty line in 2012, showing a nearly seven-percent increase in comparison with about a decade ago (1999).

The report predicts that 64 percent of the poor will live in constant poverty, with the average gap between family income and the poverty line standing at 34.4 percent.

The leader of the Labor Party, Itzik Shmuli, also slammed the government for economic hardships in view of the report.

“[Finance minister Yair] Lapid scolds the poor to go and work but the statistics show that not only a majority of the poor are working people, but 25 percent of poor children go out and work,” Shmuli said.

“The government must set social targets in legislation to eradicate poverty and reduce inequality, we have had enough of empty declarations of importance to the government, when all the government does is tell people to go to work,” he added.

Many Israelis have been migrating in recent months to Germany and the United States. It is said that the Israelis are leaving Israel on economic grounds.

High taxes and low salaries have had adverse effects on the lives of Israelis, specifically the middle class, in recent years.

Discontented Israelis almost regularly take to the streets in Tel Aviv and other cities to protest against Tel Aviv’s economic plans and the painful austerity measures, which have raised taxes and cut welfare benefits.