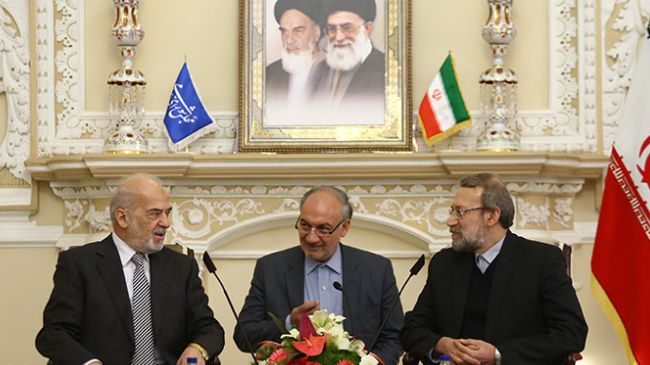 Iran Majlis Speaker Ali Larijani has stressed the importance of bolstering Iran’s relations with Iraq, saying the existence of a strong and stable neighboring country is important for the Islamic Republic.

“Enemies of the Iranian and Iraqi nations are against their close relations as well as Iraq’s economic growth and welfare,” Larijani said in a meeting with head of the National Iraqi Alliance Ibrahim al-Jaafari in Tehran on Tuesday.

“It is necessary that the two brother and neighboring countries [of Iran and Iraq] move to further increase their ties and cooperation,” the top Iranian parliamentarian added.

He stated that Iran and Iraq enjoy religious, cultural and geographical commonalties, noting that common interests and concerns have prepared the ground for more consultation and cooperation between the two countries.

Larijani further pointed to the latest developments in the region, particularly the crisis in Syria, saying that sending terrorists and weapons to the Arab country will only exacerbate regional instability.

“The Syria crisis only has a political solution and well-wishing regional countries should help the Syrian people to resolve their problems through constructive interaction and cooperation,” Larijani stated.

Syria has been gripped by deadly unrest since March 2011. According to reports, Western powers and their regional allies — especially Qatar, Saudi Arabia, and Turkey — are supporting the militants operating inside Syria.

According to the United Nations, more than 100,000 people have been killed due to the violence in Syria.

Jaafari, for his part, emphasized the significance of his country’s ties with Iran and said Tehran has always played a constructive role in the establishment of stability and peace in Iraq.

Iran and Iraq should boost consultation and cooperation with the purpose of improving regional peace and stability, he added.