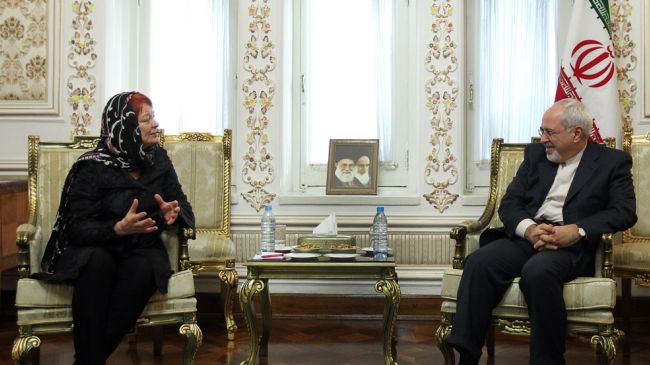 Iranian Foreign Minister Mohammad Javad Zarif says the Islamic Republic would take part in the forthcoming Geneva II conference on the ongoing Syrian crisis if it is invited to the event without any preconditions.

During a meeting with the chairwoman of the European Parliament (EP) delegation, Tarja Cronberg, in Tehran on Monday, Zarif elaborated on Tehran’s principled stance on the need for the resolution of the Syrian conflict through a political and democratic solution without any foreign intervention.

“In case of any initiative, it is the Syrian people who should decide on their own political destiny and future. Iran supports any attempt and plan to this effect, and is ready to attend the Geneva II conference if invited without any preconditions,” he pointed out.

Cronberg, for her part, described Iran as an important and influential country in regional and international developments, stating that European countries and the European Union attach paramount importance to Tehran’s political weight.

“Mr. Brahimi made clear that Iran is certainly among the list of possible participants,” he stated in a press briefing in response to a question about Iran’s presence in the peace talks on Syria.

In a meeting with the Iranian foreign minister in New York on October 2, UN Secretary General Ban Ki-moon also underscored Tehran’s decisive role in the settlement of the crisis in Syria, stressing the need for Iran’s presence in any international talks on Syria.