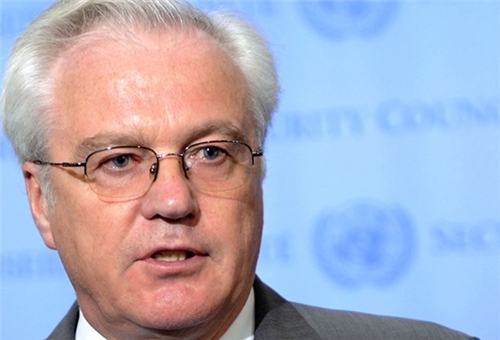 Russia has reiterated that foreign-backed militants in Syria were behind a chemical weapons attack in August in the Arab country.

“It is absolutely obvious that on August 21 a wide scale provocation was staged” by the militants “to provoke foreign military intervention,” said Russian Ambassador to the UN Vitaly Churkin on Monday following a UN Security Council meeting, AFP reported.

On August 21, hundreds of people were reportedly killed and scores of others injured in the chemical attack in eastern Ghouta on the suburbs of the capital city of Damascus.

The militants operating inside Syria and the foreign-backed Syrian opposition accused the Syrian army of being behind the deadly attack.

Following the attack, US stepped up its war rhetoric against the Syrian government and called for punitive military action against Damascus.

The Syrian government averted possible US aggression by accepting a Russian plan to put its chemical arsenal under international control and then have them destroyed.

Russia’s UN ambassador also said allegations about the involvement of the Syrian government in chemical attacks in the Middle Eastern country, including the chemical attack on August 21, “were not persuasive.”

Churkin added, “Our requests for additional information which could prove the Syrian government involvement in the use of chemical weapons were ignored by Washington.”

On Friday, the UN mission probing allegations of chemical attacks in Syria said chemical weapons were probably used at least five times during the foreign-sponsored turmoil in the country.
s
A report by the UN inspectors, led by Swedish expert Aake Sellstrom, said the Syrian army forces and civilians were the victim of the chemical attacks in several cases.

According to the United Nations, more than 100,000 people have been killed and a total of 7.8 million of others displaced due to the violence.