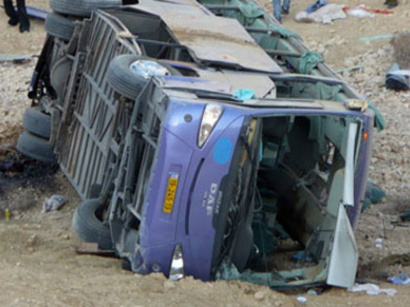 An accident involving a bus carrying students and a truck killed at least 11 people and left 13 injured.

ISNA reports that the accident happened at around 7:50 AM on Monday December 16 on the Dezfool Shooshtar road.

Highway police confirmed the number of dead so far and reported that most of the casualties were University of Shooshtar students, adding that the bus driver was also killed in the accident while the truck driver was merely injured.

On Sunday in Ardebil Province, another accident involving students on a field trip left one dead and six students injured, ILNA reports.

Tens of thousands of people die in road accidents every year in Iran and many more are injured, giving Iran one of the highest incidences of road accidents in the world.