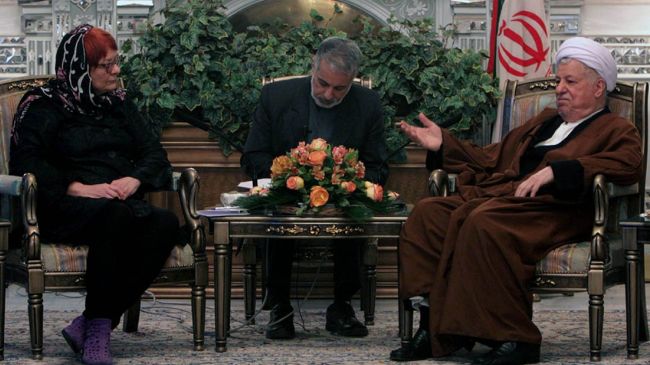 Zionist lobby behind new US bans on Iran: Rafsanjani

Chairman of Iran’s Expediency Council (EC) Ayatollah Akbar Hashemi Rafsanjani says the US move to impose new sanctions against Tehran was the outcome of the Zionist lobby’s influence and pressure.

“The world expects the government [of President Barack] Obama to implement the [Geneva] agreement and hopes the US and others will not repeat this violation of the political promise,” Rafsanjani said Monday.

He made the remarks in a meeting with Tarja Cronberg, the chairwoman of the European Parliament (EP) delegation for relations with Iran, in Tehran.

“We expect that the West, which talked of its lack of trust for many years, will, in the agreed six months, prove in practice that Western rulers can be trusted,” Rafsanjani said.

He added that the EP and European Union are bodies responsible for improving real democracy in the West and expanding relations between Western countries and Iran.

“The atmosphere of cooperation has created an opportunity for the West to stop using the language of bullying in negotiations and hold friendly discussions,” the EC chairman stated.

The administration of US President Obama on December 12 issued new sanctions against more than a dozen companies and individuals for “providing support” for Tehran’s nuclear program.

The US Treasury Department said it was freezing assets and banning transactions of entities that had attempted to evade the sanctions against Iran.

The new US embargoes come despite the nuclear deal inked between Iran and the five permanent members of the UN Security Council plus Germany in the Swiss city of Geneva on November 24.

The interim deal sought to set the stage for the full resolution of the West’s decade-old dispute with Iran over the country’s nuclear energy program.

As part of the Geneva deal, it was agreed that no more sanctions would be imposed on Iran for six months.

Cronberg, for her part, said the EP delegation is visiting Iran at a juncture that a new era has begun based on understanding of the sides’ ideals.

The European Parliament hopes that it will reopen its office in Tehran to strengthen bilateral cooperation in a six-month prospect after the Geneva deal is finalized.

The eight-member team from the European Parliament headed by Cronberg, arrived in Iran on Friday to hold talks with officials of the Islamic Republic.

Cronberg also chairs an EP body known as the European Parliament’s delegation for relations with Iran, which was established following the 2004 European elections, as a means of establishing a direct channel of communication between the EP and the Majlis of the Islamic Republic of Iran.