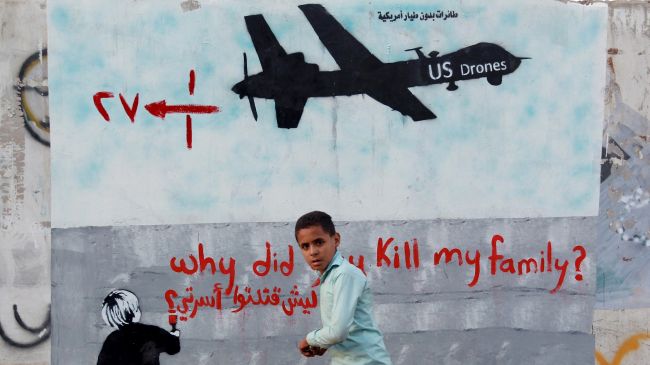 The relatives of Yemeni people killed in a recent US drone strike in central part of the country have demanded an apology and compensation, an official said.

The US drone attacked a wedding convoy near the town of Rada’a, in al-Bayda Province, on Thursday, killing 17 people.

A tribal committee went to the capital, Sana’a, in an effort to mediate with the central authorities on Saturday, only a day after people blocked a road between Rada’a and Sana’a in protest to the attack that killed their relatives, the official said.

“The first demand is an end to strikes. They also want financial and moral compensation,” the official added.

Meanwhile, security sources and witnesses said victims of the US attack were mostly civilians from al-Tays and al-Ameri clans.

According to the official, the angry relatives agreed to bury the dead after tribal mediators promised to discuss the issue with government officials.

The United States has launched numerous drone attacks in Yemen that have killed many civilians over the past few years. The drone strikes have claimed numerous civilian lives.

On October 22, Human Rights Watch (HRW) said US killer drone strikes in Yemen have led to the death of civilians over the past years in a blatant violation of international law.

“The US says it is taking all possible precautions during targeted killings, but it has unlawfully killed civilians and struck questionable military targets in Yemen,” said Letta Tayler, senior terrorism and counterterrorism researcher at Human Rights Watch.

Washington often uses its assassination drones to hit targets in Yemen as well as Afghanistan, Pakistan and Somalia. The facts on the ground indicate that civilians are frequently killed in such assaults although the US claims the CIA drones target “militants.”