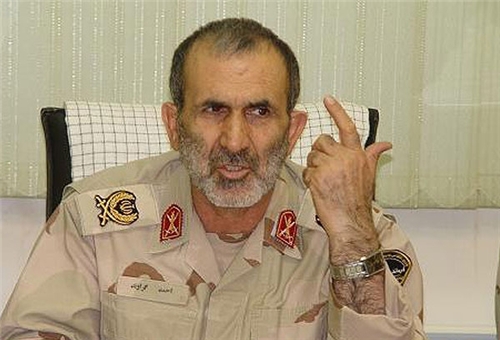 TEHRAN (FNA)- Tehran voiced displeasure in Pakistan’s lax control over its borders with Iran, identifying it as the cause of several hit-and-run terrorist attacks against Iranian troops in the last several years.

“Our most important problem is the Pakistani government which doesn’t inspect its borders,” Lieutenant Commander of Iran’s Border Guards Amir Ahmad Geravand said on Wednesday.

“Of course, we have protested many times that our border guards are shot from Pakistan’s territory, but that country has not yet adopted any action to enhance security at its border,” he added.

In a recent case of such hit-and-run terrorist attacks on Iranian troops, 14 Iranian border guards were killed and 6 more were injured by outlaws in Saravan border region in Sistan and Balouchestan, Southeastern Iran, late in October.

The terrorists who have reportedly been members of the outlawed Jeish Al-Adl radical Sunni Wahhabi movement fled into Pakistan after the operation.

In relevant remarks in October, Vice-Chairman of the Iranian Parliament’s National Security and Foreign Policy Commission Mansour Haqiqatpour cautioned Pakistan to do its best to arrest the outlaws who killed the 14 Iranian border guards in the Southeastern province of Sistan and Balouchestan.