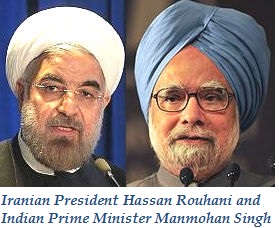 What is the status of relations between India and Iran?

New Delhi has had relatively close ties to Tehran since the mid-1980s, but India has recalibrated relations over the last few years as Iran became the litmus test for its ties with Washington.

India has also been under pressure from Israel—one of India’s leading military equipment suppliers—and the Gulf states — where millions of Indian migrants live and work – to cut back relations with Iran.

So while the Indian government would have preferred to pursue unimpeded diplomatic and trade ties with Tehran, it ultimately opted to diminish dealings with the Islamic Republic.

India continues to import Iranian crude oil using exemptions from the U.S. sanctions, but it backed out of a multi-billion-dollar natural gas pipeline project with Iran due to the complications from U.S. sanctions and the fact that the pipeline was going to traverse Pakistan.

New Delhi and Tehran continue to coordinate on development and trade issues on Afghanistan. But broader political coordination on Afghanistan is now minimal compared to the 1990s. They have not as yet joined forces, for example, to influence the succession to President Hamid Karzai or to counter Pakistani influence in Afghanistan.

The Indian government is paying a price domestically for this policy shift. It faces opposition—particularly among political forces on the left and Muslim leaders—to moving away from Iran and toward the United States.

So New Delhi welcomed the nuclear deal struck by Iran and the world’s six major powers in November 2013, which it hopes will eventually lead to the lifting of sanctions. India’s one concern, however, is that Iran’s return to the global oil market will cut its interest in trading oil with New Delhi in Indian rupees — on terms favorable to India.

People-to-people contacts between India and Iran are limited despite often-cited rhetoric from both governments. India has one of the world’s five largest Muslim populations, but 90 percent are Sunni—while Iran is predominantly Shiite. So India-Iran relations—and contacts—center narrowly on three main issues:

•  oil and gas, with entrepreneurs in both state-owned and private firms pushing for more opportunities

•  defending Indian freedom of action in foreign policy, which has been a priority for politicians and thinkers who want to protect Indian national sovereignty

Oil and Gas: On energy, India and Iran are natural trade partners. India depends onimports for up to 80 percent of its crude oil needs and 25 percent of its natural gas needs while Iran has the world’s fourth-largest proven oil reserves and second-largest natural gas reserves. India imported $11.6 billion of Iranian oil in fiscal year 2012-2013. New Delhi is Tehran’s second-largest oilcustomer. Some of this trade was conducted in Indian rupees, which was beneficial to India.

Over the last decade, the Indian government had made some efforts to promote a natural gas pipeline from Iran to India through Pakistan.

Pakistan had signed on to the project and even executed a gas purchase agreement with Iran. But U.S. sanctions on Iran and Indian apprehension about Pakistan derailed the project.

Even if Washington lifted its sanctions, New Delhi’s interest in the pipeline project would be unlikely to revive without significant improvement in India-Pakistan ties.

Regional Issues: On Afghanistan, India worked with Iran to develop trade links that bypass Pakistan. The 135-mile Chabahar-Zaranj-Delaram Highway, completed in 2009, is one example, but developing alternative trade routes is an uphill—and perhaps quixotic—task for five reasons.

•  Movement of people and goods across the Afghanistan-Pakistan border is larger and more established.

•  Cultural ties across the Afghanistan-Pakistan border are stronger and involve Afghanistan’s largest ethnic group, the Sunni Pashtuns. In contrast, the Shiite Hazaras are a smaller population.

•  Since Kabul is the main Afghan market, going through Iran is longer and more expensive.

•  Pakistan is unlikely to sit back and allow its influence to wane.

Coordination between India and Iran on Afghan development is likely to remain limited. India’s overall development assistance to Afghanistan outweighs what New Delhi does there jointly with Tehran.

Surprisingly, India and Iran do not appear to be coordinating their public positions on future political developments in Afghanistan, even with the prospect of the imminent U.S. withdrawal.

What is New Delhi’s position on Tehran’s controversial nuclear program?

Since India tested nuclear weapons in 1998, New Delhi has rejected the argument that its nuclear tests and subsequent rehabilitation within the international non-proliferation regime sets a precedent that applies to Iran.

New Delhi has tried generally to prevent India and Iran being seen in the same category. Even domestic critics of the government embrace this position, which explains why India voted against Iran at the IAEA on a 2009 resolution sponsored by Russia and China. The IAEA resolution, which criticized Iran for building a secret nuclear plant, became the basis for U.N. action against Iran and U.S. sanctions.

The problem in India’s position has been that it has not been willing to accept the connection between the nuclear issue and its oil and gas trade with Iran.

The United States and Israel view Iran’s oil wealth as a key resource for Tehran’s nuclear program— and sanctioning its trade as a way to pressure Iran into dismantling the program. But India has wanted to treat the issues separately out of self-interest.

India, Iran and Russia were key supporters of the Northern Alliance against the Taliban in the 1990s. In Afghanistan, what issues have Iran and India cooperated on? What has divided them?

India and Iran have interests that align, but that does not always translate into alliances in action. The lack of public coordination between India and Iran on Afghanistan after the withdrawal of most U.S. troops has been particularly surprising, given the history of joint support for the Northern Alliance.

India and Iran still cooperate on infrastructure projects and want to develop an alternative trade route bypassing Pakistan, but both are quixotic and limited in scope.

There is a difference between rhetoric and reality here. Yes, India has the second largest Shia community.

But this Shia community is a small albeit vibrant minority of India’s Muslims.

The relationship between Shiite scholars is not so much religious as it is intellectual.