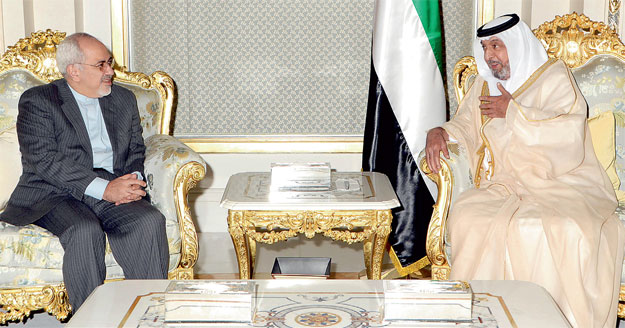 KUWAIT CITY: The six Arab monarchies of the Gulf on Wednesday hailed the “new orientation” of Iran’s leadership and urged that “concrete measures” towards regional peace follow.

The comments came in a statement issued at the end of a two-day summit in Kuwait City of the Gulf Cooperation Council, which comprises six Gulf states led by Sunni-dominated heavyweight Saudi Arabia.

The monarchies “welcome the new orientation by the Iranian leadership towards the Gulf Cooperation Council and hope it will be followed by concrete measures that would positively impact regional peace,” the statement said.

They also “welcome the interim deal signed by the P5+1 and Iran as a first step toward an inclusive and lasting agreement on Iran’s nuclear programme that would end international and regional concerns.”

Iran’s Foreign Minister Mohammad Javad Zarif last week tried to assure Gulf states the nuclear deal was not at their expense and called for a new page in relations as he toured four GCC countries, but not Saudi Arabia or Bahrain.

The tour followed comments by Iran’s new President Hassan Rouhani who, when he took over from Mahmoud Ahmadinejad in August, said he hoped to improve relations with neighbouring countries, especially Gulf states.

While welcoming the change in stance from Iran’s leaders, the GCC also betrayed a wariness towards their commitment to the nuclear deal, urging them to implement it “under the supervision of the International Atomic Energy Agency”.

In the same vein, the GCC condemned Tehran’s “occupation” of the three islands in the southern Gulf, Abu Musa, Lesser Tunb, and Greater Tunb.

The islands are under Iranian control but are claimed by the UAE.

Gulf monarchies, like Western powers, fear that Iran may develop nuclear weapons under cover of its disputed nuclear programme. Iran says its atomic drive is for peaceful purposes only.

Saudi Arabia, long wary of Tehran’s regional ambitions, had earlier reacted cautiously to the nuclear deal reached in Geneva, saying it could mark the first step towards a comprehensive solution for Iran’s nuclear programme “if there are good intentions”.

Besides Saudi Arabia and Bahrain, the GCC comprises Oman, Kuwait, Qatar and the United Arab Emirates.