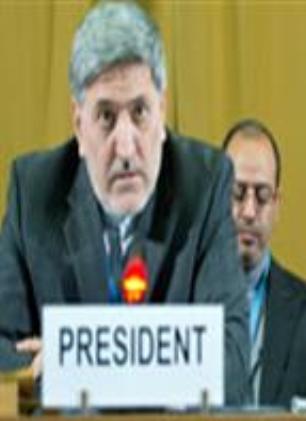 Geneva, Dec 12, IRNA – Iran’s ambassador and permanent representative in Geneva said here Wednesday Non-Aligned Movement (NAM) believes blocking the path for the scientific and peaceful activities of the countries is not justifiable under any condition.

Mohsen Naziri-Asl, who was speaking on behalf of the NAM at an Annual Meeting of the non-proliferation of Biological and Toxin Weapons Convention (BWTC), stressed the need for lifting the unjust discrimination imposed against the peaceful activities of the BWTC member states.

The representative of Iran in Geneva international organizations who was addressing the BWTC meeting said, “The developing countries must especially be benefitted from the technological advancements in easier, faster, cheaper, and more effective production of vaccines.”

Naziri reiterated, “Implementing, or maintain any limitation against the commitments stated in the BWTC in development of technologies, provision of materials, and dual usage facilities is breaching Article 10 of the convention.”

Elsewhere in his address he said, “We should refrain from getting involved in discussions that distract the attention of the member states from the need to strengthen the convention. In this regard, an effective international move in this respect for countering the threat of biological and toxin weapons must be legally obligatory and non-discriminating.”

It should be noted that the United States has thus far been blocking the path for the ratification of the BWTC protocol for establishment of a verification strategy and practical commitment of the member states to the BWTC.

The Annual Meeting of the BWTC which began its activities on Monday, December 9th, will wrap them up on Friday December 13th.

Iran, which is now the rotating president of the NAM in addition to the opening ceremony address, also pursues the other topics in the agenda of the BWTC, including international cooperation with concentration on Article 10.

The strongerst and moST recent treaty in the field of biological weapons is the Convention on the Prohibition of the Development, Production and Stockpiling of Bacteriological (Biological) and Toxin Weapons and on Their Destruction (BTWC or BWC), which entered into force in 1975.

The BTWC fills in the gaps left by the Geneva Protocol in banning the production, stockpiling, development, and acquisition of biological weapons.

Because the BTWC is the strongest international law regarding biological weapons currently in place, most of the work toward disarmament is focused on expanding and strengthening it.