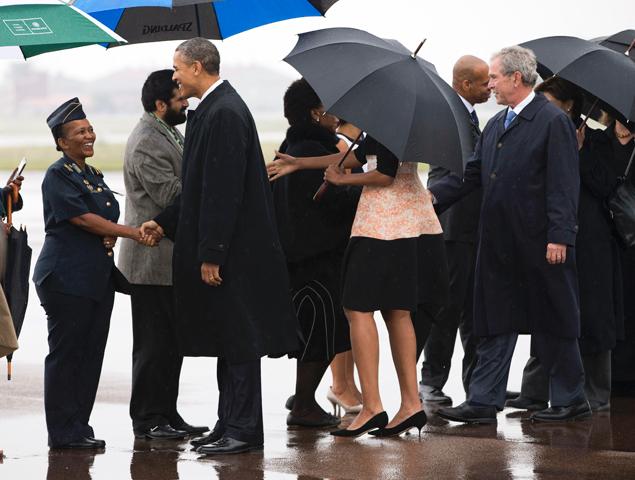 The crowds twice booed South African President Jacob Zuma, who was to give the keynote address at the service, which started an hour late. Many South Africans are unhappy with Zuma because of state corruption scandals, though his ruling African National Congress, once led by Mandela, is the front-runner ahead of elections next year.

President Obama and first lady Michelle Obama are escorted from Air Force One upon their arrival in South Africa.

Crowds converged on FNB Stadium in Soweto, the Johannesburg township that was a stronghold of support for the anti-apartheid struggle that Mandela embodied as a prisoner of white rule for 27 years and then during a peril-fraught transition to the all-race elections that made him president.

A man takes a photograph of a giant billboard ahead of the memorial service for former South African president Nelson Mandela at the First National Bank Stadium in Soweto, near Johannesburg, South Africa.

Steady rain kept many people away. The 95,000-capacity stadium was filling up during the ceremony, which began at noon local time with the singing of the national anthem.

The mood, though, was celebratory. A dazzling mix of royalty, statesmen and celebrities was in attendance.

Thabo Mbeki, the former South African president who succeeded Mandela, got a rousing cheer as he entered the stands. French President Francois Hollande and his predecessor and political rival, Nicolas Sarkozy, arrived together. United Nations Secretary-General Ban Ki-moon waved and bowed to spectators who sang praise forMandela, seen by many South Africans as the father of the nation.

“I would not have the life I have today if it was not for him,” said Matlhogonolo Mothoagae, a postgraduate marketing student who arrived hours before the stadium gates opened. “He was jailed so we could have our freedom.”

Rohan Laird, the 54-year-old CEO of a health insurance company, said in the stadium that he grew up during white rule in a “privileged position” as a white South African and that Mandela helped whites work through a burden of guilt.

“His reconciliation allowed whites to be released themselves,” Lair said. “I honestly don’t think the world will see another leader like Nelson Mandela.”

Workers were still welding at a VIP area as the first spectators arrived amid an enormous logistical challenge of organizing the memorial for Mandela, who died Dec. 5 in his Johannesburg home at the age of 95.

A woman, with tears in her eyes, braves heavy rain as she waits for the start of the memorial service.

Other speakers include the presidents of Brazil, Namibia and India, as well as tributes from Mandela’sgrandchildren.

Frederik Willem De Klerk, the former South African president who freed Mandela from prison, arrives with his wife Elita for the memorial service.

Tuesday was the 20th anniversary of the day when Mandela and South Africa’s last apartheid-era president, F.W. de Klerk, received the Nobel Peace Prize for their efforts to bring peace to their country.

Mandela said in his acceptance speech at the time: “We live with the hope that as she battles to remake herself, South Africa will be like a microcosm of the new world that is striving to be born.”

People start singing at the memorial.

The sounds of horns and cheering filled the stadium ahead of the ceremony. The rain, seen as a blessing among South Africa’s majority black population, enthused the crowd.

“In our culture the rain is a blessing,” said Harry Tshabalala, a driver for the justice ministry. “Only great, great people are memorialized with it. Rain is life. This is perfect weather for us on this occasion.”

People blew on vuvuzelas, the plastic horn that was widely used during the World Cup soccer tournament in 2010, and sang songs from the era of the anti-apartheid struggle decades ago.

A South African does his best to shield himself from the heavy rain as he makes his way to the service.

“It is a moment of sadness celebrated by song and dance, which is what we South Africans do,” said Xolisa Madywabe, CEO of a South African investment firm.

The soccer venue was also the spot where Mandela made his last public appearance at the closing ceremony of the World Cup. After the memorial, his body will lie in state for three days at the Union Buildings in Pretoria, once the seat of white power, before burial Sunday in his rural childhood village of Qunu in Eastern Cape Province.

British prime minister David Cameron is interviewed by media prior to the service at the FNB Stadium.

Police promised tight security, locking down roads kilometers (miles) around the stadium. However, the first crowds entered the stadium without being searched.

John Allen, a 48-year-old pastor from the U.S. state of Arkansas, said he once met Mandela at a shopping center in South Africa with his sons.

“He joked with my youngest and asked if he had voted for Bill Clinton,” Allen said. “He just zeroed in on my 8-year-old for the three to five minutes we talked.”

Women with tattoos of former South African President Nelson Mandela on their faces smile as they arrive for his memorial service at the stadium in Soweto, near Johannesburg, South Africa, Tuesday.

People sing and dance at First National Bank Stadium, also known as Soccer City, ahead of a memorial for former South African President Nelson Mandela in Soweto, near Johannesburg, Tuesday.

People start singing as they arrive for a mass memorial for former South African President Nelson Mandela at First National Bank Stadium in Soweto, near Johannesburg, on Tuesday.

Members of the public arrive for the Nelson Mandela’s memorial service at the First national Bank Stadium in Soweto, near Johannesburg, South Africa, on Tuesday. More than 60 heads of state are attending a week of events commemorating the life of the former South African president.

Lasers beam an image of former South African President Nelson Mandela onto Cape Town’s Table Mountain on Monday to honor the departed leader on the eve of his memorial service on Tuesday.