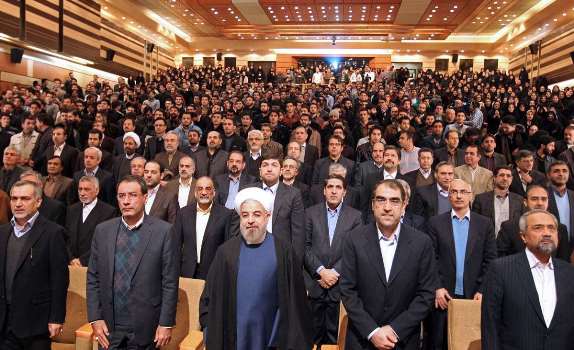 This week marks the 60th anniversary of the killing of three students by Iranian security forces during a peaceful demonstration in Tehran on December 7, 1953. Today thousands of student activists in Iran will gather for Students’ Day, as they have every year since this tragic event, to peacefully demonstrate for change in their country.

Student activists in Iran seek privileges considered elsewhere to be basic human rights. Saturday honors numerous days where students demonstrated for safe dormitory conditions, and the right to an education and to peacefully gather as a group.

For generations the Iranian student movement has been an important engine driving social change in the country and the principal voice for democratic participation and accountability. Today’s student activists are not ideological; they are not seeking to change the world or overthrow their government. They simply want to improve conditions in Iran, for themselves and their fellow citizens.

Iranian forces have long sought to suppress students’ basic right to free assembly. In the wake of the 2009 Green Movement, the authorities shut down the Office of Consolidating Unity (OCU) – a national student association which calls for political reform and opposes human rights violations – because it was considered a threat to the state. From the deaths of Ahmad Ghandchi, Shariat-Razavi and Bozorg-Nia in 1953 to the detainment and torture of hundreds of other students in Iran in recent years, the Iranian government demonstrates a dangerous resistance to even nonviolent calls for democratic reform.

Many of the leading voices for change in Iran will not be participating in Students’ Day demonstrations this year. Majid Tavakoli, Sayed Ziaoddin Nabavi and Bahareh Hedayat are just three student prisoners of conscience currently behind bars in Iran. Tavakkoli, a student leader and winner of the 2013 Norwegian Student Peace Prize, is currently serving a nine year prison sentence for speaking in 2009 during a peaceful Students’ Day demonstration at Tehran’s Amir Kabir University of Technology. Iranian authorities have charged him with  “participating in an illegal gathering” and “spreading propaganda against the system.”

Bahareh Hedayat is currently serving a ten-year prison sentence for “insulting the president,” “insulting the Supreme Leader,” “gathering and colluding to commit crimes against national security” and “spreading propaganda against the system.” And Sayed Nabavi is serving a ten-year sentence after being convicted of “enmity against God.” Amnesty International concludes that Nabavi is imprisoned solely for his peaceful activities with the Advocacy Council for the Right to Education.

Others, like me, have been luckier. After being arrested four times and spending only three months in prison, I was released to find I was barred from receiving further higher education in Iran. During my last stay in prison in 2010, when I was arrested for attending a post-election protest, I suffered a heart attack in solitary confinement triggered by physical abuse and horrible prison conditions. When I got out I wasn’t allowed to defend my dissertation and earn the Masters degree in Management I had worked so hard for.

Many hoped that the election of moderate President Hassan Rouhani would usher in a new era in Iran. There was a sense of optimism among student activists that acts like simply gathering as a group would no longer lead to detention or being banned from the educational system.

During his first 100 days in office, some change has come. Iran’s Ministry of Higher Education announced in September that recently some “starred” students – those who were considered a security threat by the intelligence ministry and  banned from higher educaiton  – could now reenroll in universities. Authorities granted the student activist Tavakoli, who they previously denied prison leave, permission in October to see his family on furlough. But still we see that these gains are limited. Hundreds of starred students and students of the Baha’i religious minority are still unable to attend university. No sooner had Tavakoli entered his mother’s arms – an image widely tweeted, even by President Rouhani – than he was returned back to prison. Because judicial authorities sometimes use extended furlough as an informal mode of release, many thought, especially after the President’s tweet, that would be the case with Tavakoli. They were bitterly disappointed.

As we reflect on the 60th Anniversary of StudentS’ Day, activists in Iran and exiled Iranians such as myself are not satisfied by these half steps alone. Too many students remain in prison, are denied an education and are banned from gathering peacefully.

This yearas students across Iran gather for Students’ Day to peacefully call for their  rights as citizens, the Iranian authorities should address their concerns and end the culture of punishment and fear. These brave students need help from the international community, which is now engaging with Iran and thus in a position of greater influence, to press the Iranian government to reconsider such deeply rooted practices. Iran’s students who leave the country are celebrated around the world for their talent and skills. It’s time they were treated inside Iran with basic dignity and respect.

This article was written by Mehdi Arabshahi for Iran wire on December 10,2013.Mehdi Arabshahi is an exiled Iranian attending the SUNY Albany’s Master’s Program in Management and Public Administration. He is the former president of the Office of Consolidating Unity.