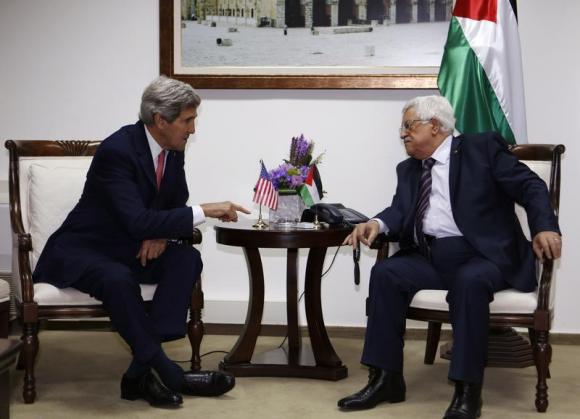 Palestinians say Kerry appeasing Israel over Iran – at their expense

The accusations by Yasser Abed Rabbo, who joined Palestinian President Mahmoud Abbas in a meeting with U.S. Secretary of State John Kerry last week, further clouded hopes of achieving a negotiated accord by an April target date.

Kerry, who is expected to return to the region late this week, presented both sides with suggestions on Thursday about how Israel might fend off future threats from a Palestinian state envisaged in West Bank land it now occupies.

Israel has long demanded that under any eventual accord it retain swathes of Jewish settlements in the West Bank, as well as military control of the territory’s eastern Jordan Valley – effectively, the prospective Palestine’s border with Jordan.

But Abed Rabbo told Voice of Palestine radio that Kerry had plunged the process into crisis by seeking to “appease Israel through agreeing to its expansion demands in the (Jordan) Valley under the pretext of security.”

U.S. acquiescence to Israel’s security demands was aimed at “silencing the Israelis over the deal with Iran and achieving a fake progress in the Palestinian-Israeli track at our expense”, he said.

Abed Rabbo was referring to the November 24 interim accord reached in Geneva between world powers and Iran, whereby it agreed to some curbs on its disputed nuclear program in exchange for the easing of international sanctions.

Dan Shapiro, the U.S. ambassador to Israel, said on Monday there was no quid pro quo between the Iran and Palestine talks.

“These two issues concern both Israel’s security and our security and the interests of all the Middle East, that it be a more quiet and stable region. But we do not see any linkage in which we seek to give on one issue and receive on the other,” Shapiro told Israel’s Army Radio.

Israeli Prime Minister Benjamin Netanyahu initially condemned Geneva as an “historic mistake” that risked helping Iran’s limping economy, while leaving it with the means to make a nuclear bomb. Iran says its nuclear drive is peaceful.

The Geneva deal further strained the Netanyahu government’s ties with the Obama administration, which is mindful of support for the Jewish state in the U.S. Congress, though Netanyahu struck a more conciliatory tone last week.

Israel has not commented on the U.S. proposals but cabinet minister Yaakov Peri said on Sunday the government had not yet agreed to them.

Amid deep Palestinian pessimism over prospects for a deal, many Israelis also question whether Abbas would be able to keep his armed Islamist Hamas rivals, who rule the Gaza Strip and spurn coexistence with the Jewish state, to an eventual accord.

Shapiro said Gaza’s government would have to change for Palestinian statehood to be fully realized.

“We are talking about two states for two peoples. The Palestinian state will also include Gaza. But there has to be a change to the regime there. That is clear.”