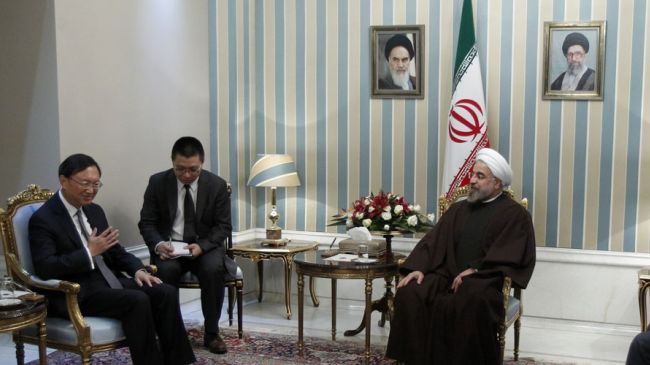 Iranian President Hassan Rouhani says the Islamic Republic will never back down from its nuclear rights, including uranium enrichment for peaceful purposes.

“Iran’s nuclear activities are and will remain peaceful and Iran will not back down from its nuclear rights, including [uranium] enrichment,” said President Rouhani in a meeting with Chinese State Councilor Yang Jiechi in Tehran on Sunday.

During the talks, the Iranian president praised good cooperation between Iran and China in the recent nuclear negotiations between Tehran and the six major world powers – China, Russia, Britain, France, the US and Germany – in Geneva in late November.

The Iranian president further described relations between Tehran and Beijing as “strong” and “strategic,” expressing Iran’s willingness for the expansion of bilateral ties between the two nations.

Yang, for his part, said his country respects Iran’s right to use peaceful nuclear technology, including uranium enrichment, saying Tehran defended its rights during its discussions with the six powers in Geneva.

Under the Geneva nuclear deal, the six countries agreed to lift some of the existing sanctions against the Islamic Republic in exchange for Iran’s confidence-building measure to limit certain aspects of its nuclear activities.

The Chinese official also stated that Beijing seeks to broaden its regional and international cooperation with Tehran, outlining his country’s latest decisions to increase economic exchanges with the Islamic Republic.