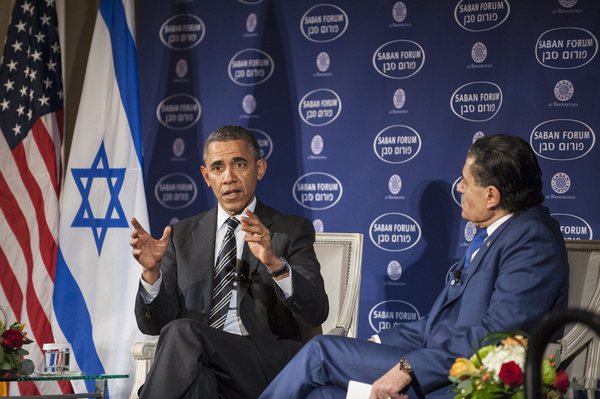 WASHINGTON — President Obama signaled Saturday that he was prepared to allow Iran to enrich uranium on its soil, saying that an eventual nuclear deal could be structured to ensure that Tehran’s program would be only for peaceful purposes.

In an appearance sponsored by Brookings Institution’s Saban Center for Middle East Policy, Obama said it was not realistic to expect that Iran could be forced to dismantle every part of its multibillion-dollar nuclear infrastructure. He said that in upcoming international negotiations Iran could be allowed a “modest” enrichment program, with strong international monitoring to assure that Tehran could not suddenly accelerate production to produce a nuclear weapon.

“If we could create an option in which Iran eliminated every single nut and bolt of their nuclear program and forswore the possibility of ever having a nuclear program, and for that matter got rid of all its military capabilities, I would take it,” Obama said in a conversation with the center’s principal supporter, Los Angeles businessman Haim Saban.

“But I want to make sure everybody understands it – that particular option is not available. So as a consequence, what we have to do is make a decision as to, given the options available, what is the best way for us to [ensure] Iran does not get a nuclear weapon?”

Obama said the likelihood of a successful final deal with Iran was no greater than 50%.

Negotiators from six world powers signed an interim deal with the Islamic Republic two weeks ago that will open the way for difficult negotiations over the next six months to try to ensure that Tehran is not able to reach a bomb-making capability.

The deal gives Iran limited relief from tough economic sanctions over the next six months in exchange for curbs intended to ensure that Tehran cannot advance its nuclear capability while the final negotiations are underway.

Obama is struggling to sell the deal in the face of strong resistance from Congress, Israel, Saudi Arabia and others who fear it will leave Iran enough capability to secretly edge toward a nuclear weapon.

Congress may adopt new sanctions in the coming weeks that Obama fears could destroy the fragile diplomacy before negotiations resume.

Iran says its nuclear program is solely for energy and medical uses.