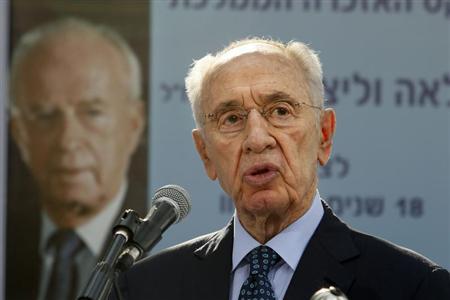 I would meet Rouhani: Shimon Peres

TEHRAN, Dec. 8 (MNA) – According to Times of Israel, Shimon Peres at the 2013 Israel Business Conference in Tel Aviv said that he would like to meet with President Rouhani.

“Enemies [are] not a matter of a person,” Peres continued, “but a matter of policy. There were times [when] we didn’t want to meet, for example, with Arafat. But the moment Arafat changed his policy, why not?”

Official relations between Israel and Iran have been suspended since the 1979 Islamic Revolution.

In late November, Rouhani’s government signed a nuclear deal with the six world powers known as the P5+1, an agreement sharply criticized by Israel.

The six-month interim nuclear deal includes greater access for UN inspectors to Iran’s nuclear facilities and a cap on the level of uranium enrichment in return for a halt to new sanctions and an easing of existing sanctions.

“Many were trying to isolate Iran, but who is isolated today? Our enemies are in fact isolated,” Rouhani said, according to a translation by the semi-official Press TV.

He did not refer to Israel by name, but used language — “an illegitimate, occupier regime” — commonly used to describe the country, which the Iranian regime considers an archenemy.

Israel has repeatedly criticized the deal and called it a “historic mistake.”

In his UN General Assembly speech in September, Netanyahu blasted Rouhani as a “wolf in sheep’s clothing” and warned the US against mistaking a change in Iran’s tone with a change in its nuclear ambitions.

The Israeli leader subsequently denounced the potential nuclear agreement as the “deal of the century” for Iran.

Shimon Peres released a less critical statement at the time, saying that Israel prefers diplomacy but the deal “will be judged by results, not by words.”

There is a possibility to solve this issue diplomatically. It is in your hands. Stop the nuclear program. Stop the development of long-range missiles. Israel, like others in the international community, prefers a diplomatic solution.”