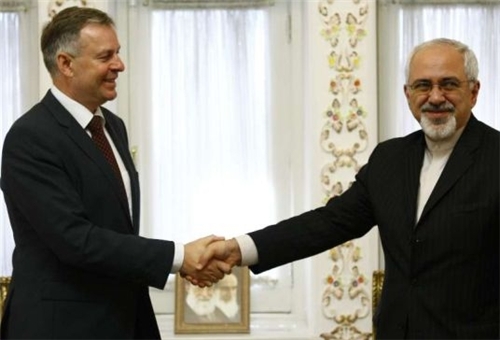 Austrian envoy hopes for removal of all sanctions against Iran

TEHRAN (FNA)- Austrian Ambassador to Tehran Friedrich Stift expressed pleasure in the positive results of an interim nuclear deal between Iran and the world powers sealed in Geneva, and hoped for the removal of all sanctions against Tehran after the endorsement of the final agreement by both sides.

Speaking at a ceremony at Tehran University, the Australian envoy told reporters that it is expected that the next round of talks would lead to a final agreement and subsequently total lifting of sanctions.

Iran and Austria enjoy deeply rooted relations but due to economic sanctions the level of bilateral trade exchange has decreased, he said, hoping that with lifting of sanctions bilateral cooperation would expand.

On November 24, Iran and the G5+1 reached a deal in Geneva after days of hard work and intensive negotiations.

Speaking at a press conference at the time, Zarif pointed to the agreement reached between Iran and the G5+1, and said, “Today’s agreement deals with several sectors, the most important of which is that Iran’s enrichment program has been recognized, and this program will continue.”