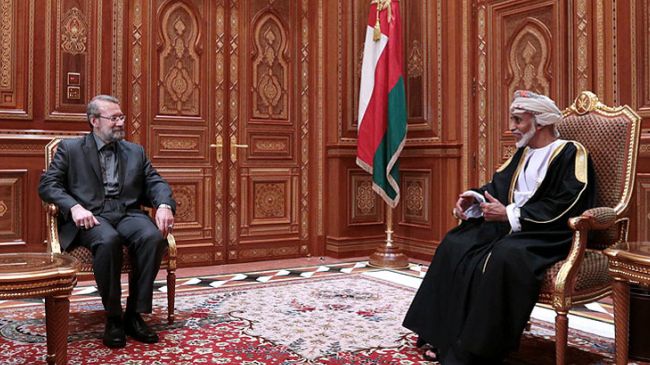 Speaking to reporters on Friday upon his arrival in Tehran after a three-day visit to Oman, Larijani elaborated on the achievements of his trip, during which he had several meetings with the Arab country’s  officials including Omani ruler Sultan Qaboos bin Said Al Said, the Omani foreign minister, as well as the parliament speaker.

“In the meetings with Omani King Sultan Qaboos and that country’s foreign minister, we had discussions on bilateral activities, particularly in the sphere of economy,” Larijani told reporters.

“One of the issues, which could be highly positive for the Iranian investors and they could benefit from that, is the job opportunities and investment in Oman, which may have remained unknown for us,” the Iranian parliament speaker added.

Larijani further noted that Omani authorities have expressed willingness to make investments in Iran in the areas of agriculture, petrochemical industry and shrimp farming.

“Omani merchants were interested in increasing cooperation and investment in the Islamic Republic of Iran,” he noted.

The Omani ruler was the first guest of the Iranian President Hassan Rouhani who was inaugurated in early August. 2013. Shortly after his election, Rouhani said he hoped to improve relations with neighboring countries, especially the Persian Gulf states.

On that trip, in late August, the two countries’ energy ministers signed a 25-year gas supply agreement whose overall value has been put at $60 billion at current prices and which would be by far the biggest trade deal between the two neighbors.

As a first step, both sides are studying viable routes for the laying of a gas pipeline that will channel Iranian gas to the Sultanate.

And for years there has also been talk about an India-Iran-Oman energy triangle, whereby an under-sea natural gas pipeline would connect Oman and India.