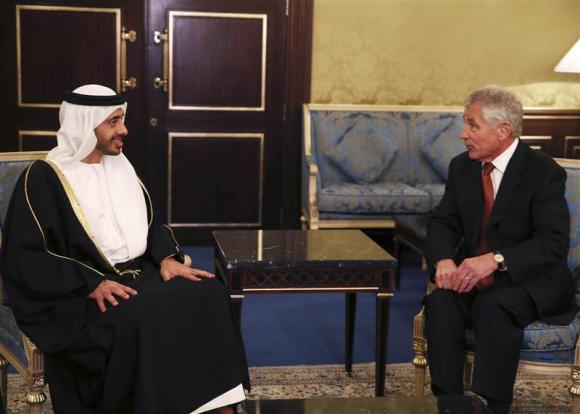 (Reuters) – U.S. Defense Secretary Chuck Hagel said on Saturday the United States would maintain a wide array of military forces in the Middle East to ensure security in the volatile region despite diplomatic overtures toward Iran over its nuclear program.

Hagel, in prepared remarks to the Manama Dialogue security forum in Bahrain, said the Pentagon had no plan to adjust its military presence or planning in the region as a result of an interim accord on Tehran’s nuclear enrichment program.

The Pentagon chief, seeking to reassure the wary Gulf Arab leaders about Washington’s intentions, said even as diplomacy moves forward, U.S. security guarantees will be backed by a fierce array of aircraft, ships, tanks, artillery and 35,000 troops.

“Going forward, the Department of Defense will place even more emphasis on building the capacity of our partners in order to complement our strong military presence in the region,” he said in prepared remarks.

“Our goal is for our allies and partners in this region to be stronger and more capable in dealing with common threats,” he said.

Hagel’s address to the security forum later on Saturday comes at a time of heightened tension in the relationship between Washington and its longtime Gulf Arab partners.

Leaders in the region are worried the United States will lose focus on the Middle East as it strategically rebalances to Asia. And they are frustrated over the U.S. handling of the Arab Spring protests and the Syrian civil war.

To underscore the scope of the U.S. security commitment to the region, Hagel outlined the array of American military forces in the area, including more than 35,000 military personnel “in and immediately around the Gulf.” Included in that figure were 10,000 Army soldiers with armor, artillery and helicopters.

Hagel said the United States has deployed its most advanced fighter aircraft to the region, including the radar-evading F-22.

And more than 40 Navy ships patrol the waters nearby, including an aircraft carrier and its supporting ships, Hagel said. U.S. Navy vessels have steamed through the narrow Strait of Hormuz at the mouth of the Gulf some 50 times in the past six months in the name of ensuring freedom of navigation.