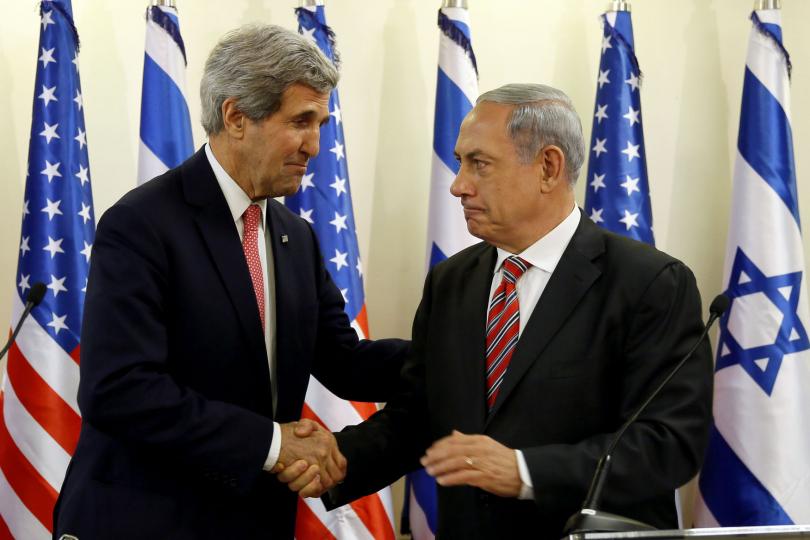 Netanyahu made the comments at a press briefing in Jerusalem following a 2-hour meeting with U.S. Secretary of State John Kerry.

Before talking about peace talks with the Palestinians, Netanyahu said he and Kerry “first and foremost” discussed the potential for Iran to develop nuclear weapons, and the interim agreement reached last month in Geneva, Switzerland, between Iran and the P5+1 — the five members of the U.N. Security Council, plus Germany — to give Iran some relief from international sanctions in exchange for Iran suspending key parts of its nuclear program.

“We believe that in a final deal, unlike the interim deal, it’s crucial to bring about a final agreement about determination of Iran’s military and nuclear capability,” Netanyahu said. “I have expressed my concern since Geneva that the sanctions would begin to unravel, and I think steps must be taken to prevent further erosions of sanctions.”

Kerry told reporters some progress had been made in peace talks and Gen. John Allen, U.S. security envoy for the Middle East peace process, presented Netanyahu with security proposals that would be discussed in a meeting later in the day, Haaretz said.

“I can’t emphasize enough that Israel’s security in this negotiation is at the top of our agenda,” Kerry said. “And the United States will do everything in our power to make certain that Iran’s nuclear program — a program of weaponization possibilities — is terminated.”

“Now, on the Palestinian issue, I want to say that Israel is ready for historic peace, and it’s a peace based on two states for two peoples,” Netanyahu said. “It’s a peace that Israel can and must be able to defend itself, by itself, with our own forces against any foreseeable threat.”

“What we need is not grandstanding, but understanding and agreements,” he said.

Kerry arrived in Israel late Wednesday. He was scheduled to meet later Thursday with Palestinian President Mahmoud Abbas in Ramallah and due to leave Israel Friday, Haaretz said.