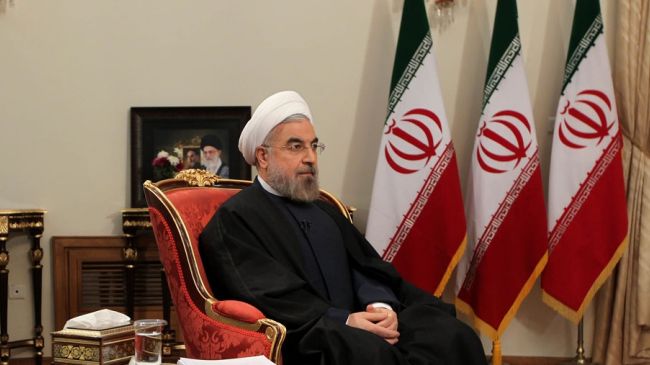 Iran’s President Hassan Rouhani has offered his heartfelt condolences to the South African government and nation over the passing of country’s former president and anti-apartheid hero Nelson Mandela.

In a Friday message to South African President Jacob Zuma, Rouhani expressed deep sorrow over Mandela’s demise, describing him as a unique and international figure.

”Nelson Mandela had a firm belief in the freedom and equality of all humans, not only in his country South Africa, but across the world. He never faltered in this strongly held belief,” said President Rouhani in his message.

“On this rough and rugged road replete with hardships, Mandela magnificently bestowed meaning on the ‘long path to freedom’ by suffering displacement, distance from home and family and long-term imprisonment,” Rouhani added.

His wise policies have contributed heavily to the elimination of racial discrimination in South Africa while his efforts to achieve freedom and equality and to eliminate the remnants of oppression and discrimination from the colonialist era can be witnessed across the African continent, Rouhani said elsewhere in his message.

In a somber statement on South African national television on Thursday night, Zuma said Mandela had passed away at the age of 95 in Johannesburg.

Mandela, who led South Africa’s transition from white-minority rule in the 1990s after nearly three decades in prison, was one of the towering political figures of the 20th century.

He had been receiving home-based medical care for a lung infection after three months in hospital. He had been suffering from chronic respiratory conditions, probably due to the fact that he contracted tuberculosis in prison years ago.

In a message on Friday, Iranian Foreign Minister Mohammad Javad Zarif also expressed his condolences to the South African government and nation over Mandela’s passing away.

The Iranian minister described Mandela as a great leader in the fight against racial discrimination.

Zarif said Mandela was a “lasting symbol of freedom-seeking and fight against apartheid.”

Mandela served as president of South Africa from 1994 to 1999, and was the first South African president to be elected in a fully representative democratic election.

After years of resistance against the apartheid rule in South Africa, Mandela was arrested in 1962. He was sentenced to life in prison, where he served over 27 years. He spent many of those years on Robben Island.

Following his release from prison on February 11, 1990, Mandela led the African National Congress party in the negotiations that led to multi-racial democracy in 1994. As president, he frequently gave priority to reconciliation. He left office in 1999 after serving one term as president.

Mandela received more than 250 awards over four decades, including the 1993 Nobel Peace Prize.