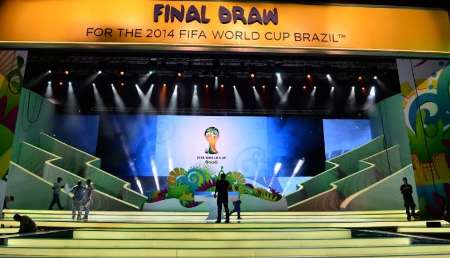 The mock group drawings were staged by Germanyˈs famous television personality Johannes B. Kerner who grouped Iran with top football guns Germany and Holland as well as Chile, ranked 15th on the FIFA list.

The 32 teams at the 2014 World Cup will be placed into four pots for Fridayˈs draw at Costa do Sauipe, Brazil.

The eight seeded teams from Pot 1 will head the eight groups of four, A to H.

Hosts Brazil will head Group A and play the opening game in Sao Paulo on June 12.

The pots for the draw are:

Each of the eight groups can contain no more than two European teams, while teams from the other confederations will also be kept apart.

Pot 1 will then be emptied with teams allocated to position 1 of Groups A to H sequentially.

As the European team in Pot 2 cannot go to a group with a seeded European team, the four seeded South American teams will be placed in an ancillary pot – called Pot X. One of the four teams from this pot will then be drawn.

Pot 2 will then be emptied, beginning with the European team, which will then join the group of the South American team drawn from Pot X.

The remaining teams will be allocated to Groups A to H sequentially – however groups may be skipped to ensure geographical separation (Chile and Ecuador cannot be in groups with seeded South American teams).

Pots 3 and 4 will be emptied in order.