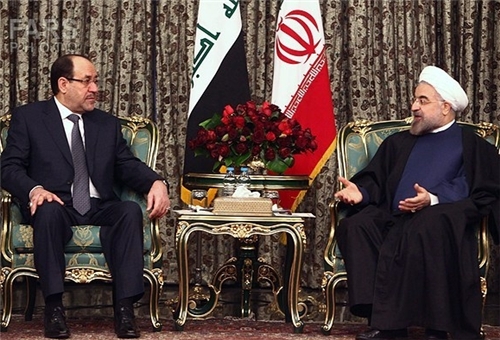 TEHRAN (FNA)- Iranian President Hassan Rouhani in a meeting with Iraqi Prime Minister Nouri al-Maliki said that the Geneva II conference should focus on expelling the foreign-backed terrorists from Syria.

During the meeting in Tehran on Thursday, President Rouhani said the international conference on Syria to be held in Geneva should focus on the full exit of terrorists from Syria and preparing the ground for holding free elections in that country.

Al-Maliki, for his part, said that Iraq believes that all regional problems will be solved through the efforts being made by the new Iranian government.

November that Iran is ready to take part in the planned Geneva II conference on the Syrian crisis “without any preconditions”.

The UN announced in November that the Syrian government and opposition negotiators would meet for the first time since start of the country’s 32 month-old crisis in Geneva on 22 January. UN leader Ban Ki-moon said in announcing the landmark conference that it would be “a mission of hope”.

“If Iran is invited to attend the Geneva II conference, we will take part in the conference without any precondition,” Zarif told reporters at the time.

After the UN declared the date for the high-profile gathering, its envoy Lakhdar Brahimi said that the Geneva II conference on Syria, set for January 22, would start “without any preconditions”.