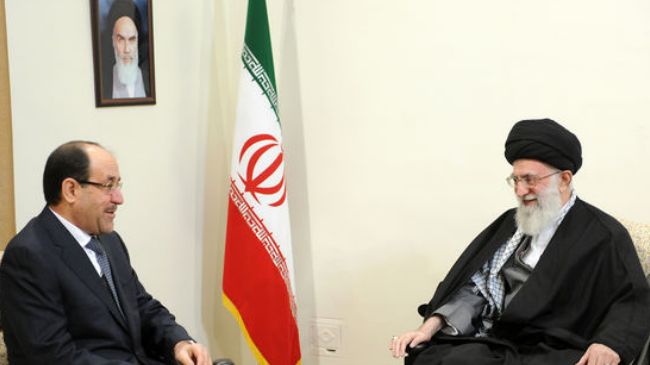 Leader of the Islamic Revolution Ayatollah Seyyed Ali Khamenei has lauded the performance of the Iraqi government, noting that more needs to be done in the country.

“The efforts you are making for your country today are invaluable. Of course, Iraq has far more needs [to be met].” said the Leader in a Thursday meeting with visiting Iraqi Prime Minister Nouri al-Maliki.

Underlining the significance of upgrading political and economic ties between Iran and Iraq, Ayatollah Khamenei emphasized that Tehran and Baghdad can work together closely in a wide range of areas, and that there are no limitations to the promotion of reciprocal ties as well as regional cooperation.

Ayatollah Khamenei pointed to Iran’s significant scientific progress in recent years, and added that one of the areas of mutual cooperation would be for Iran to share its scientific experiences with Iraq.

The Leader also praised Iraqi President Jalal Talabani, who has been suffering health problems recently, as a good and sincere friend of Iran and wished him good health.

Iraqi Prime Minister Maliki thanked the Iranian government and expressed hope that his talks and agreements with Tehran during the current visit would lead to expanded ties in various fields.

Prime Minister Maliki arrived in Tehran Wednesday and is due to meet with top Iranian officials, including President Hassan Rouhani and Foreign Minister Mohammad Javad Zarif.