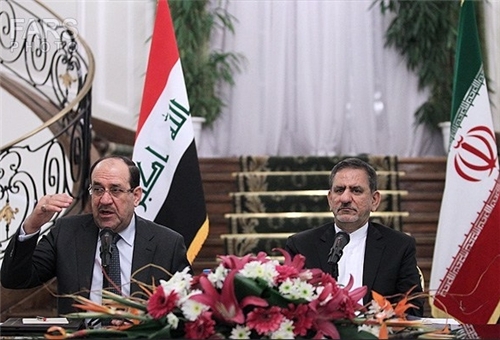 TEHRAN (FNA)- Iranian First Vice-President Eshaq Jahangiri underlined the necessity for finding a political solution to the crisis in Syria, and expressed the hope that the Geneva II conference would yield good results.

Jahangiri made the remarks after a meeting with visiting Iraqi Prime Minister Nouri al-Maliki on Wednesday.

He told reporters that political solution is definitely the only way out the situation in Syria, adding that fueling the conflict does not favor the Syrian nation.

In relevant remarks on Friday, Iranian Deputy Foreign Minister for Arab and African Affairs Hossein Amir Abdollahian said an immediate halt in arms shipment to the foreign-backed militants in Syria would be the main contributor to the success of the International Geneva II Peace Conference.

“The success of the (International) Geneva II depends on the halt of certain party’s support for the flow of terrorists and arms into Syria,” Amir Abdollahian said in Tehran.

“The important point is that attempts were made over the past 30 months to eliminate Syria from the resistance movement or substantially weaken it through the flow of weapons and terrorists into the country,” the Iranian deputy foreign minister stated.

The top Iranian official said Tehran is holding consultations with regional allies as well as the Syrian government to work out a joint solution and help the coming Syrian-Syrian peace talks in Geneva to emerge fruitful.