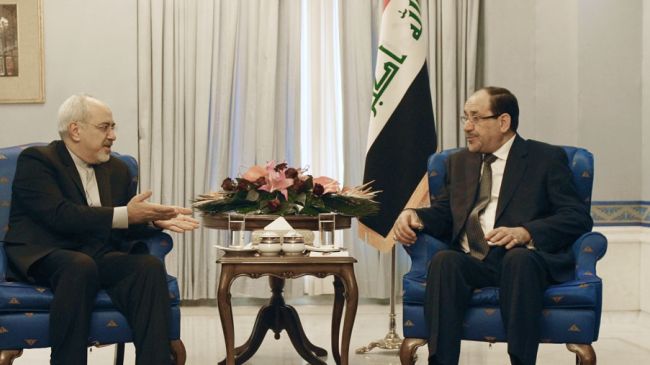 Iran says it seeks the promotion of Iraq’s stability and security as those of its own and is ready to offer every assistance to the Iraqi nation in this regard.

“We should try to forge bilateral relations in all areas, particularly in the field of economy, in a way that serves the interests of both nations for years to come,” the top Iranian diplomat noted.

He also pointed to regional development and lamented terrorist acts in Iraq. The Iranian foreign minister said terrorism is a pandemic issue and warned against resorting to terrorism to pursue political interests.

Maliki, for his part, hailed the recent deal struck between Iran and the six major world powers in the Swiss city of Geneva over Tehran’s nuclear energy program, saying, “This achievement and its advancement will doubtlessly be in line with the interests of all countries in the world and the region.”

On November 24, Iran and the five permanent members of the United Nations Security Council — the United States, China, Russia, France and Britain — plus Germany sealed an interim deal in Geneva to pave the way for the full resolution of the West’s decade-old dispute with Iran over the country’s nuclear energy program.

According to the agreement, in exchange for Iran’s confidence-building bid to limit certain aspects of its nuclear activities, some of the existing sanctions against the Islamic Republic would be removed.

Elsewhere in the meeting, the Iraqi prime minister described the enhancement of Baghdad-Tehran ties as important.

“The Iraqi government is ready to prepare the ground for further development of cooperation in all spheres, including in economy, within the framework of negotiations between the two countries’ officials,” Maliki said.

He also stressed the need for a collective and international campaign against terrorism, stating that past experiences in the region show that terrorism cannot be constrained within any particular borders and will backfire on its sponsors.