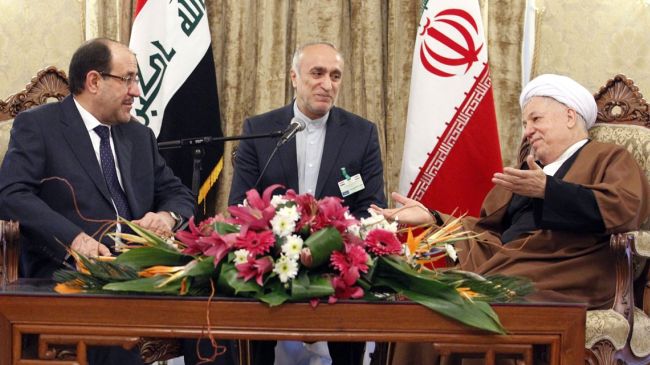 “The deeper the ties between Iran and Iraq, the more sustainable security will be in the region,” said Ayatollah Rafsanjani in a meeting with Iraqi Prime Minister Nouri al-Maliki in Tehran on Thursday.

The Iranian official further expressed concern over a surge in violence across Iraq and said, “Terrorist groups and the enemies of Muslims do not want to see the Iraqi people’s national unity and their peaceful co-existence with neighbors and Islamic countries.”

Maliki, for his part, pointed to his meetings with high-ranking Iranian officials in Tehran and said the talks focused on deepening bilateral relations in political, economical and security areas.

Elsewhere, the Iraqi leader outlined the goals pursued by enemies in supporting Takfiri terrorists such as the al-Qaeda militants operating in Iraq, stressing that such groups will soon menace their backers.

A spike in violence across the Arab country has claimed around 6,200 lives since the beginning of this year.

According to figures released by the country’s ministries of health and defense earlier this week, at least 948 people lost their lives in violent attacks across Iraq in November.

In October, the Iraqi premier warned that his country is facing a “war of genocide,” blaming al-Qaeda militants for killing thousands of people in the Arab state.