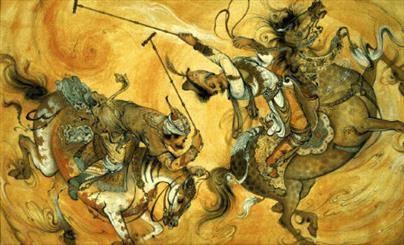 Azerbaijan concedes ‘chogan’ is not an Azeri game: Iranian official

TEHRAN, Dec. 5 (MNA) – An official of Iran’s Cultural Heritage, Tourism and Handicrafts Organization (CHTHO) has said that Azerbaijan has officially accepted the fact that chogan (polo) is not an Azeri game.

CHTHO’s Department for Registration of Natural, Historical and Intangible Heritage Director Farhad Nazari made the remarks on Tuesday after UNESCO registered chovqan (the Azeri word for chogan) as a traditional Karabakh horse-riding game for the Republic of Azerbaijan on its List of Intangible Heritage in Need of Urgent Safeguarding during the 8th session of the Intergovernmental Committee for the Safeguarding of Intangible Cultural Heritage in Baku, Azerbaijan.

“The efforts made by the Iranian delegation at the meeting convinced Azerbaijan to officially acknowledge verbally and in writing the fact that chogan is not an Azeri game,” he said.

He added that the efforts also led to the modification of Azerbaijan’s file on chogan in the meeting.

“As a result, Iran also can to apply for registration of the Iranian chogan on the list. In addition, UNESCO experts in the meeting agreed that chogan would be registered as a multinational element on the UNESCO list,” Nazari stated.

CHTHO Director Mohammad-Ali Najafi asked UNESCO in October to register chogan as a multinational element on its List of the Intangible Cultural Heritage of Humanity.

CHTHO Deputy Director Mehdi Hojjat previously said that Afghanistan, Pakistan and India, along with Iran, have a claim on the game.

The 8th session of the Intergovernmental Committee for the Safeguarding of Intangible Cultural Heritage will continue in Baku until December 7.

The Paach ceremony, a corn-veneration ritual celebrated in San Pedro Sacatepéquez in Guatemala was also on the List of Intangible Heritage in Need of Urgent Safeguarding.

The Committee is also scheduled to review four other nominations for the list and 30 nominations for inscription on the Representative List of the Intangible Cultural Heritage of Humanity.