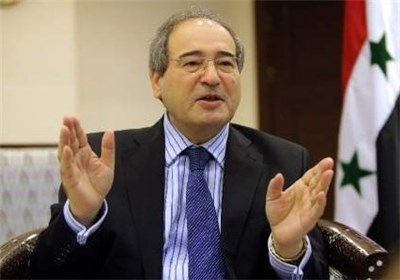 TEHRAN (Tasnim) – A Syrian deputy foreign minister underlined his country’s determination to implement the Chemical Weapons Convention (CWC), and thanked Tehran for providing Damascus with technical assistance in that regard.

Syria’s Deputy Foreign Minister Faisal al-Meqdad described Iran’s assistance and consultations to the Arab country to get rid of its chemical weapons stockpile as helpful and constructive, saying Damascus is determined to go through with its commitments as a party to the Chemical Weapons Convention.

Meqdad made the comments in a meeting with Iran’s Deputy Foreign Minister for Legal and International Affairs Seyed Abbas Araqchi, on the sidelines of the 18th session of the Conference of the States Parties to the Chemical Weapons Convention in the Dutch city of The Hague on Tuesday.

Araqchi, for his part, praised the Syrian officials for making a “timely” decision to join the Chemical Weapons Convention, saying the move “disappointed the extremists.”

He also expressed Tehran’s preparedness to transfer its experience and expertise in implementation of the CWC to the Syrian government.

The CWC aims to eliminate an entire category of weapons of mass destruction by prohibiting the development, production, acquisition, stockpiling, retention, transfer or use of chemical weapons by States Parties. States Parties, in turn, must take the steps necessary to enforce that prohibition in respect of persons (natural or legal) within their jurisdiction.

In October, a joint OPCW-United Nations team charged with overseeing the destruction of the chemical weapons began inspecting sites in Syria.

The UN Security Council resolution that authorized the mission has set a deadline of mid-2014 for Syria to destroy its chemical weapons or face consequences.

The joint mission confirmed on October 31 that the government of Syria completed the functional destruction of critical equipment for all of its declared chemical weapons production facilities and mixing or filling plants, rendering them inoperable.

The US has offered to help destroy some of the most lethal parts of Syria’s chemical weapons stockpile at an offshore facility, the OPCW said recently. The weapons are to be removed from Syria by December 31.