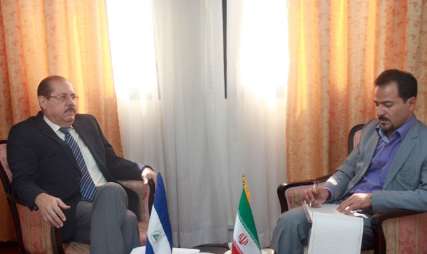 The Iranian MP stressed the importance of parliamentary relations between the two sides, arguing that such interactions can serve as a platform for the further growth of Tehran-Managua political, economic, and cultural relations.

Amiri Khamkani also expressed delight over the good and growing relations between the two countries, saying given the positive views of senior officials in both countries on improvement of bilateral ties, the required measures should be taken to increase the levels of mutual interactions.

The Nicaraguan ambassador, for his part, asked for further expansion of comprehensive bilateral ties and cooperation, including on international arenas.

According to statistics released by the International Monetary Fund, Iran’s trade with Latin America has witnessed a considerable rise since 2008.

In January 2012, the former Iranian president visited Nicaragua to attend the inauguration of Nicaraguan President Daniel Ortega for his third term.

In a meeting with Iran’s Minister of Economic Affairs and Finance Shamseddin Hosseini in February 2012, Nicaraguan Foreign Minister Samuel Santos Lopez invited Iranian companies to invest in Nicaragua and urged a visit by an Iranian delegation of investors to his country for reviewing investment opportunities.