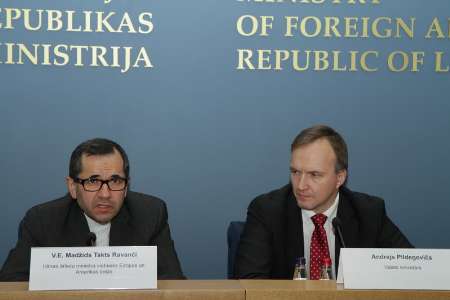 London, Dec 3, IRNA – Senior Iranian and Lithuanian officials in a meeting in Lithuania underlined the need for the further expansion of bilateral ties.

The acting Lithuanian foreign minister welcomed the recent agreement between Iran and the six world powers (the US, Russia, China, France, Britain and Germany).

In a separate meeting with Lithuanian Culture Minister Dis Lambard, Takht Ravanchi pointed to the cultural and civilizations track record of Iran and the achievements in the cultural fields of both countries, and termed mutual cooperation in different cultural affairs, including film, book and music, cultural heritage and civilization as good ground for further familiarization between the people of the two countries.

The Lithuanian culture minister, for her part, pointed to Riga’s becoming cultural capital of Europe in 2014 and asked Iran to take part in that country’s cultural programs for the next year.