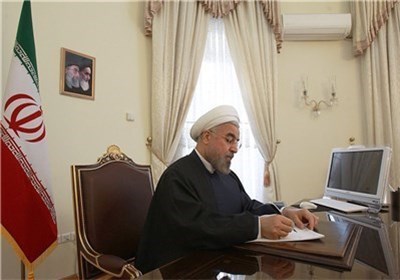 TEHRAN (Tasnim) – In a felicitation message to UAE President Sheikh Khalifa bin Zayed Al Nahyan on his country’s national day, President Hassan Rouhani hoped that that existing friendly relations would be further deepened in the interest of both nations.

“I hope the brotherly relations and good neighborliness that exist between the Islamic Republic of Iran and the United Arab Emirates will further deepen … given the two countries numerous commonalities in religious, cultural, and historical fields,”  read part of President Rouhani’s message.

On November 28 Foreign Minister of the United Arab Emirates (UAE) arrived in Tehran on for talks with Iranian officials on issues of mutual interest.

The two countries officials discussed bilateral ties and exchange views on the regional and international developments.

UAE National Day is celebrated from 2nd December each year in United Arab Emirates for two days or more. It marks the UAE’s formal nationalisation from the British Protectorate Treaties which ended on December 1, 1971 and the eventual, federal unification of the seven emirates in 1971 which combined to form the modern-day country, headed by Sheikh Zayed bin Sultan Al Nahyan, the federation’s first president.

The Iranian foreign minister is now in Oman after visiting Kuwait as part of the country’s proactive regional diplomacy and has spoken of his plans to visit Saudi Arabia in the near future.