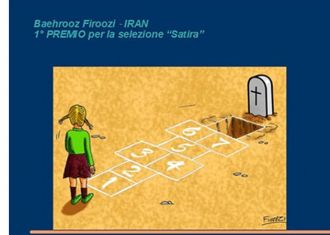 TEHRAN, Dec. 2 (MNA) – The Iranian cartoonist Behruz Firuzi has won the first prize at the 17th edition of the international competition Fax for Peace, Fax for Tolerance in Spilimbergo, Italy.

He received the prize for his cartoon depicting a little girl playing hopscotch but the safe base of it ends with a hole and tombstone, the organizers announced on November 21.

Peace, tolerance, fighting against any form of racism and the defense of human rights were the themes of the competition.