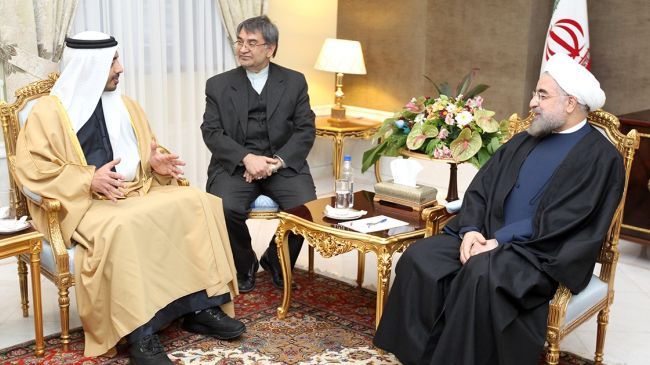 Hopes of a revival of trade ties between the UAE and Iran have been raised after Tehran and six world powers reached a landmark agreement yesterday to halt parts of its nuclear programme.

That, however, depends on whether the parties reach a more permanent agreement.

Trade between the UAE and Iran will decline to US$4.5 billion this year, from $8.5bn last year, dragged down by global sanctions on Iran, according to Hossein Asrar Haghighi, the executive vice president of the Iranian Business Council.

“[The easing of the sanctions] means more trade for exporting countries, and will have a positive effect on SMEs [small and medium-sized enterprises] and businesses, especially those in the import and export of petrochemical products from Iran,” Mr Haghighi said.

“Those [businesses] who have migrated outside the UAE are likely to activate their set-ups here depending on how well-established they are and where they have gone.”

The Iranian Business Council has a membership of about 150 companies, including SMEs. At its peak, it had about 390 members before sanctions were tightened.

Under the terms of the agreement struck yesterday in Geneva, Iran has agreed to a series of curbs on its nuclear industry, including the suspension of uranium enrichment beyond the level at which it can be used for weapons research. It would grant greater access to inspectors at its Natanz and Fordow nuclear sites, and suspend further development of its Arak nuclear plant.

In return, the international community has agreed to a “limited, temporary, targeted, and reversible relief” of sanctions.

The relief measures include a pledge to not impose new sanctions for a six-month period, and the suspension of certain sanctions on gold and precious metals, Iran’s automotive sector, and its petrochemicals exports. Furthermore, the world community is permitting purchases of Iranian oil to remain at their current significantly reduced levels, and the repatriation of $4.2bn of funds from the sales to Iran.

The agreement will be valid for six months, during which the parties involved will attempt to negotiate a more lasting settlement.

Ramsey Jurdi, a Dubai-based partner with law firm Chadbourne & Parke, said although the transfer of funds would provide Iran with a significant cash injection, the effect of the suspension of sanctions was largely symbolic.

In the short term, they would not have a significant impact on Iran’s trade flows, Mr Jurdi said.

“This move is not opening the door for any new business deals,” he said. “What it is a freezing of the sanctions currently in place, and allowing a slow drip feed of money back into the country that’s currently frozen abroad.”

Any significant relief for Iranian businesses in the UAE would only come about when restrictions on Iranian banking activity are eased, according to Mr Jurdi.

“Right now those restrictions remain fully in place, and that will continue to be an obstacle to any new trade flows,” he said.

Patrick Murphy, a legal director with Clyde & Co in Dubai, said the psychological impact of the landmark agreement was not insignificant, and might lead to an increase in trade in the medium term.

“It’s a change in the mood, and from that perspective, it’s a big thing,” Mr Murphy said. “If you take it to the logical ends that both parties appear to want, I don’t see any reason why you can’t have a big uptick in trade.”

Even a recovery of trade flows to pre-sanctions levels would represent a significant upturn, he said.