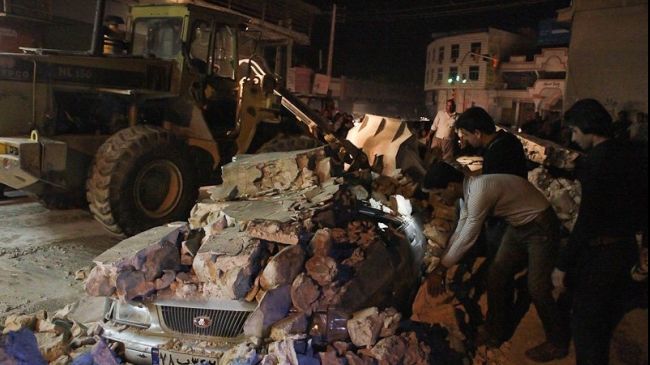 EU Foreign Policy Chief Catherine Ashton has expressed condolences to the quake-stricken people in the southern Iranian city of Borazjan.

At least seven people were killed and nearly 200 others were injured when an earthquake measuring 5.7 on the Richter scale rattled Borazjan in Bushehr Province on November 28.

“It was with great sadness that the High Representative heard of the earthquake in Borazjan,” Michael Mann, Ashton’s spokesman, said in a statement on Saturday.

“Her thoughts are with the people of Borazjan in this difficult moment,” Mann added.

According to the Iranian Seismological Center, the quake hit Borazjan, located 1,150 kilometers (714 miles) south of the Iranian capital, Tehran, at 5:21 p.m. local time (1351 GMT) on Thursday.

Earlier on Saturday, Iran’s President Hassan Rouhani arrived in southern Bushehr Province on a day-long trip to see first-hand the areas hit by the powerful earthquake.

Rouhani has also voiced the administration’s readiness to offer any help to the people affected by the quake.

The deadliest earthquake to hit Iran in recent years struck on December 26, 2003, when a 6.6-magnitude quake jolted the city of Bam and its surrounding areas in the southeastern province of Kerman, leaving tens of thousands of people dead and injured.