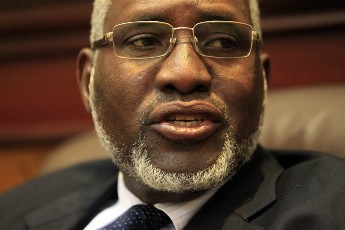 November 30, 2013 (KHARTOUM) – The Sudanese vice-president, Al-Haj Adam Youssef, has affirmed that his country doesn’t build relations with Iran at the expense of its ties with the Arab Gulf states and denied reports of tensions in relations between Khartoum and Riyadh.

Adam said in an interview with the London-based Asharq Al-Awsat daily newspaper that Sudan’s relations with Iran are based on the common interests and not intended to threaten the interests of the Arab Gulf states.

Mostly Sunni Muslim Arab Gulf states are wary of Iranian influence in the Middle East, fearing the Shiite-led country is seeking regional dominance and stirring sectarian tensions. The Syrian unrest also increased the gap between the two sides, as the Arab monarchies are supporting the rebels and Iran backs Al-Assad regime.

The vice-president stressed that Sudan’s ties with the Arab Gulf states are based on geography, kinship, and religion and described their relations as strategic and eternal, saying that they are keen to maintain and develop the ties with the Gulf States.

The Sudanese government has allowed Iranian warships to dock in Port Sudan three times since last year but denied that it’s a sign of a military alliance directed against any nation.

The Saudi pro-government Al-Riyadh newspaper blasted Khartoum over the Iranian warships, slammed Bashir’s regime saying that Sudan is now at odds with most Arab countries and failed to attract Arab or foreign investors.

Bashir , who performed Hajj (pilgrimage) this year, did not meet with King Abdullah bin Abdulaziz. The Saudi monarch had held separate talks with the Turkish and Pakistani presidents who also performed Hajj this year.

The vice-president further asserted that Sudan’s ties with Saudi Arabia are strong and pointed to the large Saudi economic investments in Sudan, saying that the kingdom supports Sudan in all regional and international forums.

“All rumours about tepid relationship between the two countries fall within the category of evil purposes emanating from those who seek to play in troubled waters”, he added.

Youssef also spoke about Sudan’s relations with Egypt following the ouster of the former president, Mohamed Morsi, and said that Sudan doesn’t interfere in Egypt’s domestic affairs, stressing that they respect the choice of the Egyptian people.

He emphasised that Sudan would mediate between the government and the Islamic opposition if asked to do so by the Egyptian government.

Sudan’s Islamist government appeared uncomfortable with the developments in Egypt given the common ideology they shared with Morsi and the Freedom and Justice Party (FJP) which brought him to power.

However, Khartoum insisted that it is neutral to the change in Egypt and that it an internal matter.

Unlike most Arab leaders, the Sudanese president has not congratulated interim Egyptian president Adli Mansour on his new role.