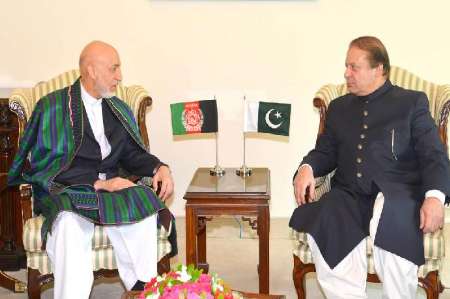 TEHRAN (Tasnim) – Pakistan’s prime minister arrived in Kabul on Saturday for a one-day visit to discuss efforts to start a peace process with the Taliban and energy projects to alleviate chronic power shortages in both countries.

Nawaz Sharif was on his first visit to Afghanistan since being elected. He’s planning to hold talks with President Hamid Karzai, who has been pushing Pakistan for help in talking to the Taliban and for access to a Taliban leader recently released by Pakistan. Many Taliban leaders are thought to be based in Pakistan, and Kabul has sought Islamabad’s help to bring the militant group to the table.

They will also discuss a plan to expand an electricity distribution network to ship surplus power from the Central Asian states of Kyrgyzstan and Tajikistan through Afghanistan and into Pakistan, which suffers massive power shortages that threaten its industrial production and economy.

Another project is a planned natural gas pipeline from Turkmenistan that will pass through Afghanistan to Pakistan and end up in India, AP reported.

Relations between the two countries have been testy and Afghanistan has often accused Pakistan of aiding Taliban leaders sheltering across the border. Sharif has nonetheless made improving ties with Afghanistan a priority.

Karzai was in Pakistan last August and the two leaders again met in October, where they agreed during a London meeting for Islamabad to allow an Afghan peace delegation to meet with Mullah Abdul Ghani Baradar.

The Taliban’s former No. 2 was released by Pakistan in September after years in detention. Some officials hope he can help jumpstart the peace process, while others have their doubts. The Afghan delegation met with him last week, officials said.

Pakistan has released around four dozen Taliban prisoners over the last year in an attempt to help peace talks, but there is no sign they have made any difference.

The Taliban have refused to talk directly with Karzai, his government or its representatives. US-backed talks between Afghanistan and the Taliban failed in June after Karzai accused the militants of setting up a government in exile. The Taliban have since closed their office in the Gulf state of Qatar.

Pakistan has a complicated relationship with the Taliban. Pakistan helped the group seize control of Afghanistan in 1996, and Kabul has repeatedly accused Islamabad of providing the insurgents sanctuary on its territory following the US-led invasion of Afghanistan in 2001.