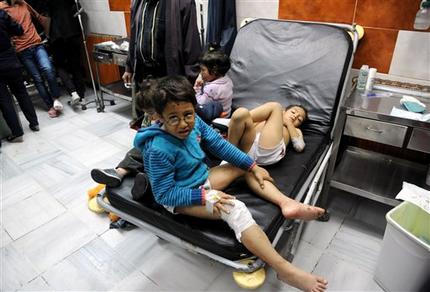 DAMASCUS, Syria (AP) — A mortar round struck the front of a historical mosque in Syria’s capital Friday, killing four people and wounding 26 in the latest such attack on the city, state media reported.

It was not clear when the shell fell Friday, the Muslim day of prayer when people traditionally go to mosque at noon for the weekly sermon. Syrian state news agency SANA said the shell fell in front of the western entrance of the mosque. It said most of the casualties were women and children.

The shelling near the Umayyad Mosque in the old quarter of Damascus came 10 days after a mortar shell hit its wall, causing some damage but no casualties.

SANA said many of the wounded were women and children. It showed the picture of four children who appeared to be receiving treatment for minor injuries at a hospital.

Another photograph showed a boy on a hospital bed with a wound to his left leg.

Dozens of shells have struck the historic city center and surrounding areas in the past two weeks, launched from rebel-held neighborhoods on the outskirts. Mortar shells, many homemade, are known to be imprecise so it’s not possible to determine whether the rebels fire them randomly or at specific targets.

Much of the shelling in recent weeks has centered on Christian-majority areas in the Old City, where many residents now barricade themselves at home and schools are half empty. Businessmen say sales have plunged because people no longer dare to go out.

On Thursday, a mortar shell landed inside the Russian Embassy in Damascus, killing one Syrian and wounding nine, including guards, the Russian Foreign Ministry said. The embassy building sustained minor damage.

More than 100 people have been killed in mortar attacks on Damascus since this summer, according to reports by SANA and the Syrian Observatory for Human Rights, a British-based activist group. That has punctured the sense of normalcy that the government has tried hard to cultivate in the capital.

For the first two years after the uprising began in March 2011, the ancient city with its historic markets, mosques and churches was largely insulated from the bloodshed and destruction that plagued other areas.