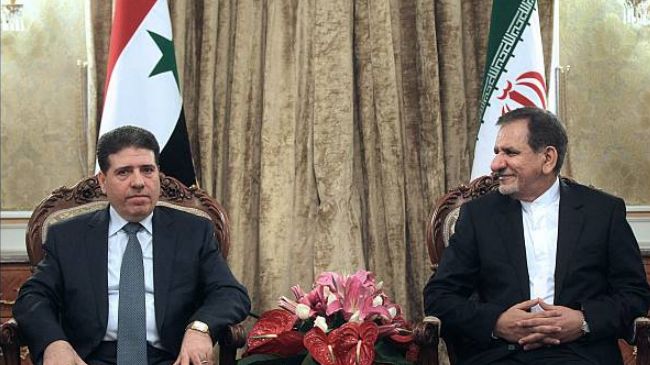 Iran’s First Vice President Eshaq Jahangiri has lauded the Syrian government’s decision to destroy the country’s chemical arsenal as a prudent way to avert war against the country.

Jahangiri made the remarks in a meeting with members of the visiting Syrian delegation headed by the country’s Prime Minister Wael al-Halqi in Tehran on Saturday.

The war rhetoric against Syria intensified after foreign-backed opposition forces accused the government of President Bashar al-Assad of having launched a chemical attack on militant strongholds in the suburbs of Damascus on August 21.

Damascus vehemently denied the accusations, saying the attack was carried out by the militants themselves as a false-flag operation.

Expressing regret over the support of certain regional and Western countries for extremism and violence in Syria, Jahangiri said, “These people and groups have not only deprived the Syrian people of peace, but pose a great danger to the whole region and the Muslim world.”

The Iranian official added that fighting extremism is the duty of all countries and the international community should not be indifferent towards the matter.

Syria has been gripped by deadly unrest since 2011. According to reports, the Western powers and their regional allies – namely Qatar, Saudi Arabia and Turkey – are supporting militants operating inside Syria.

More than 100,000 people have been killed since the beginning of the conflict in Syria in March 2011.

Al-Halqi, for his part, voiced Syria’s willingness for Iranian companies to participate in the country’s reconstruction after the crisis is resolved.

The Syrian prime minister arrived in Tehran to discuss regional issues, including the Syria crisis, with Iranian officials on Friday.