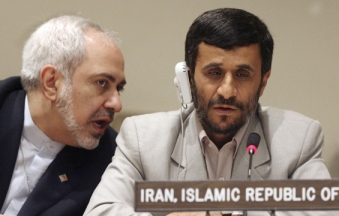 Mehr News reported that in 2006, Iran’s sixth president spoke clearly about Western sanctions on Iran, “you assume that if you collaborate on preparing a scrap of paper [resolution], you would stand against Iranian people?” this was spoken by Ahmadinejad during his March 2007 visit to Yazd province, which won for him extensive criticism by some presidential elections nominees, including Rouhani himself.

However, Rouhani’s foreign minister, Mohammad Javad Zarif, in today’s Parliament open session, confirmed Ahmadinejad’s speech that ‘sanctions had been paper scraps.’ Zarif was speaking about ‘breaking the pillars of sanctions. “When UN sanctions removed, US other sanctions would be paper scraps,” said Zarif to the Parliament. “They had been sanctioning us for 35 years,” he added.